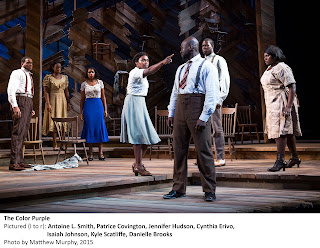 You might wonder at the point of reviving a musical a mere seven years after the original Broadway production shuttered, especially as that first production – for all its virtues -- was not exactly a unanimous critical favorite.

But there’s no question that this John Doyle production – a hit at London’s Menier Chocolate Factory -- is a winner all the way.

Beautifully staged, against an imposing wall of chairs (the set also designed by Doyle, by the way), which serve as props at various points, the cast is perfection, starting with Cynthia Erivo, the sole London import.

She received well deserved accolades there, and not forgetting LaChanze’s terrific, Tony Award-winning portrayal in the original, Erivo is indeed superb as Celie in all her ages, from docile, sexually abused teenager, to compliant wife of the brutal husband known as Mister (a powerful Isaiah Johnson) to gradually enlightened woman with a growing awareness of her self-worth. Her powerful eleven o’clock number, “I’m Here,” earns deserved cheers.

Danielle Brooks from “Orange is the New Black” is sensational as Sofia, the no-nonsense gal who falls for Mister’s easygoing son Harpo (a very engaging Kyle Scatliffe). Her musical declaration “Hell No!” – sung after Harpo is egged on by his father to try to beat her into submission – is a real crowd-pleaser, as much for her dynamic delivery as for the sentiments of the lyric.

Joaquina Kalukango – so galvanic in this past summer’s Encores production of “The Wild Party” – scores again here in a much more subdued role as Celie’s dedicated schoolteacher sister.

Second-billed Jennifer Hudson is Shug Avery, the glamorous femme fatale who sets all the men agog, and spurs Celie to find the courage to stand up to Mister. Hudson’s advocacy of Weight Watchers has certainly paid off, as she cuts a voluptuous figure and carries herself with convincing sexual swagger. Her singing is terrific from her tender “Too Beautiful for Words” to her “Push da Button” showpiece, and she creates a sympathetic character. My only qualm about her performance is that she occasionally rushes her dialogue, and therefore doesn’t enunciate certain lines as clearly as she ought.

But she and Erivo have the requisite chemistry, as their characters develop a warm affection for each other.

Speaking of aural matters, Gregory Clarke’s sound design is a bit uneven overall. At least from the mezzanine level, the overly amped voices in the concerted numbers made intelligibility effortful at times.

After his striking production of Kander & Ebb’s “The Visit” this past spring, Doyle earns another feather in his cap for this clear-headed, enthralling production.

Ann Hould-Ward’s costumes and Jane Cox’s lighting contribute to the show’s pleasing visual appeal. And Music Director Jason Michael Webb brings out every nuance of the rich and varied score (by Brenda Russell, Allee Willis, and Stephen Bray) which is even stronger than remembered. Likewise, Marsha Norman’s book is remarkably solid, a canny distillation of Alice Walker’s novel.

This is sure to be a contender for Best Revival at awards time. Highly recommended.

Print this post
Posted by Harry Forbes at 10:48 AM