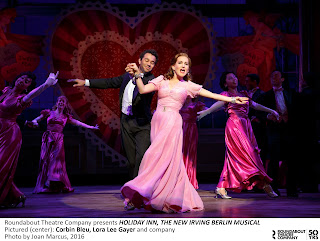 Here’s a surprisingly delightful retread of the 1942 Fred Astaire/Bing Crosby musical, outfitted with a smart book (by director Gordon Greenberg and Chad Hodge), a generous number of songs from the Irving Berlin songbook (not all from the movie), clever dance routines by Denis Jones, and a thoroughly engaging cast.

The plot follows that of the film, more or less. Song and dance team Jim (Bryce Pinkham) and Ted (Corbin Bleu) split when the latter takes off with Jim’s fiancé Lila (Megan Sikora), and Jim, weary of show business, buys a farm in Connecticut.

In short order, Jim meets and falls for sweet Linda (Lora Lee Gayor), an elementary school teacher who had once had showbiz aspirations and was the original owner of the farm which is now laden with debt.

With the help of Linda’s pal Louise (Jenifer Foote at my performance, subbing for Megan Lawrence), they hit on the idea of turning the multi-bedroom farm house into a hotel and showplace, operating only during the holidays since most of Jim’s showbiz buddies have Broadway shows the rest of the time.

When Ted returns at the end of the first act, he once again threatens to come between Jim and his latest love, as he sees in Linda the ideal dance partner for his upcoming Hollywood debut. Conflict ensues.

I normally disdain songs shoehorned in from other shows, and this time, the creators have raided actual book shows like “Call Me Madam” and “Miss Liberty” along with utilizing more predictable chestnuts like “Steppin’ Out With My Baby” and “Blue Skies.” But the original film had itself recycled earlier Berlin songs, so I suppose this is fair game. And Larry Blank’s very spiffy orchestrations and Sam Davis and Bruce Pomohac’s polished vocal and dance arrangements are so fresh that these tunes really do shine anew in this context.

Pinkham, who goes from strength to strength with each new show, makes a fine leading man. His ballads “Be Careful, It’s My Heart” and, of course, the film’s most enduring song, “White Christmas,” are very nicely delivered in his own style without a trace of Crosby mannerisms. And the brassy orchestrations tone down for those more intimate moments. Bleu is no slouch in the vocal department either, and his dancing is quite impressive, be it the playful “You’re Easy to Dance With” and, most spectacularly, the “Song of Freedom” number accompanied by firecrackers. The latter is the big show-stopper of the second act.

The first act winner is “Shaking the Blues Away,” given an excitingly novel approach with some awesome rope jumping dancing, courtesy of choreographer Jones.

Gayer is a lovely heroine, delivering “Nothing More to Say” and “Let’s Start the New Year Right” beautifully. Sikora does her cheap blonde routine well enough, and Foote provides the wise-cracking comic relief with aplomb.

Greenberg directs at a lively pace, and there were no dull patches, while music director Andy Einhorn leads his forces with pizzazz.

Audience buzz after the show was uniformly positive.