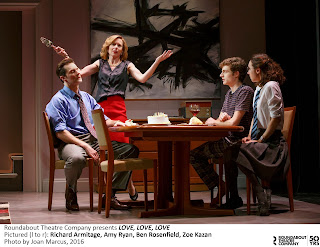 Mike Bartlett’s 2010 play, which had an acclaimed production at the Royal Court in London in 2012, may, in essence, be a scathing indictment of the baby boomer generation, but it also happens to be one of the most amusing shows in town.

In three acts, the playwright – last represented on Broadway earlier this year with the excellent “King Charles III” – wittily charts the relationship of Kenneth (Richard Armitage) and Sandra (Amy Ryan) over the course of 40 years.

When we first meet them in 1967, he’s an Oxford-bound slacker who steals her away from his dullish brother (Alex Hurt) at whose flat he’s been shamelessly crashing, while she’s a drugged-up free-spirit who sets her cap on Kenneth as soon as they meet. In the second act, 23 years later, they’re a bickering couple living an affluent upper middle-class life in Reading, but utterly self-absorbed, barely taking the time to listen to their teenage children, aspiring violinist Rose (Zoe Kazan) and emotionally troubled Jamie (Ben Rosenfield). In the last act, Kenneth and Sandra are amicably divorced, but the children are a mess, financially insecure and aimless. The parents are oblivious to the roles they have played in shaping their offspring.

Performances are razor sharp, and the cast ages believably over the time span. Ryan is particularly brilliant, delivering Sandra’s funny and thoughtlessly callous lines for maximum effect. Armitage captures Kenneth’s narcissism and self-absorption to a tee. Their children are no less sharply characterized, Rosenfield embodying the unhappy layabout, and Kazan transforming from vulnerable teen to embittered 37 year old who ultimately accuses her parents of ruining them.

In fact, when finally Rose outlines her parents’ destructive behavior, it was disconcerting to hear several audience members at my performance continuing to laugh oblivious that the mood had suddenly changed, another sad indication that many of today’s sitcom weaned audiences just can’t seem to make the leap from funny to tragic.

Derek McLane has designed three wonderfully varied settings which, along with Susan Hilferty’s costumes and David Lander’s lighting, tell you in an instant all you need to know about these characters' lives.

Director Michael Mayer brings out the humor and underlying pathos of Barlett’s clever script in a masterfully paced production.

Laura Pels Theatre at the The Harold and Miriam Steinberg Center for Theatre, 111 W 46th Street; 212-719-1300 or roundabouttheatre.org)
Print this post
Posted by Harry Forbes at 6:35 AM