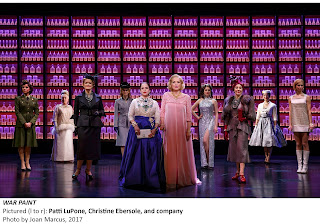 Patti LuPone and Christine Ebersole have plum roles as cosmetics queens Helena Rubinstein (LuPone) and Elizabeth Arden (Ebersole), iconic women who were powerhouse entrepreneurs at a time when that was traditionally a man’s role, and indeed, that's the dominant theme of the show's book.

Though fierce competitors, they actually never met in real life, an omission that playwright Doug Wright has rectified, much like numerous fictitious dramatizations of a meeting between Queen Elizabeth I and Mary Queen of Scots.

Of course, no one’s head is on the chopping block here, and the feud itself is less the focus than showing how two women managed to overcome sexism, racism, and impoverished backgrounds to build their huge empires. But like the recent TV series “Feud,” which chronicled the rivalry of Bette Davis and Joan Crawford, Wright seems to imply here that the two ladies were sisters under the skin, and perhaps might have been friends if their competitive natures had allowed.

As it was, they rather extraordinarily shared two men in common, Rubinstein’s right hand man, the gay Harry Fleming (Douglas Sills) left her employ to become Arden’s director of sales; while Arden’s husband Tommy Lewis (John Dossett) left her to join Rubinstein’s concern.

The show is said to be “suggested by the book of the same name by Lindy Woodhead
and the documentary film “The Powder and the Glory.”

LuPone and Ebersole are really in top form, both singing superbly and complementing each other beautifully, though LuPone should prepare herself, in light of her sometimes impenetrable lyrics thanks largely to her thick Polish accent, that she may be the target of some more good-natured spoofing if there’s another edition of “Forbidden Broadway.”

All of this has been set to music by Scott Frankel, with lyrics by Michael Korie, the team which, along with Wright, wrote “Grey Gardens.” The score, orchestrated by Bruce Coughlin under Lawrence Yurman’s music direction, is a decent one in the current-day manner, the big numbers evenly divided between LuPone and Ebersole, culminating in the latter’s career defining “Pink” soliloquy and the former’s “Forever Beautiful,” both particularly strong eleven o’clock ballads. They also share a potent duet at the very end, “Beauty in the World.”

Director Michael Greif draws fine performances from his top-billed stars, and there’s solid work from the male rivals, Dossett and Sills who share a rueful bar stool duet, “Dinosaurs” towards the end. Erik Liberman has some good bits as aggressively up-and-coming cosmetics rival Charles Revson, and Steffanie Leigh is effective as Revson’s hand model and, later, one of the early supermodels, Dorian Leigh.

The production is richly designed by David Korins, with eye-popping costumes by Catherine Zuber. Kenneth Posner’s lighting and Brian Ronan’s sound design are state of the art.

Christopher Gatelli’s choreography is effective in the “Fire and Ice” production number, and elsewhere, such as the stylized openings of the two acts.