The True (The New Group) 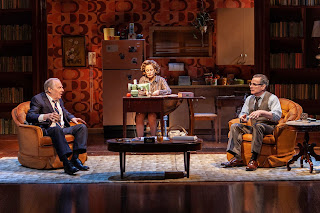 
To cut to the chase, Edie Falco is just plain wonderful as Dorothea “Polly” Noonan, the blithely foul-mouthed right-hand confidante to Albany’s mayor Erastus Corning II (played by Michael McKean) in 1977. Sharr White’s absorbing play, which crackles with lively and thought-provoking dialogue, concerns Corning disassociating himself from Noonan after decades of the latter’s passionate support.


Erastus has been a close friend of Polly and her husband Peter (a beautifully understated Peter Scolari), but suddenly the mayor’s social visits to their household cease. Polly is beside herself with grief and puzzlement. She suspects that the rumors of an affair between her and Erastus are the cause, and the rift -- once it becomes public -- will seem to confirm them.


Peter urges her to let the matter rest, but indefatigable Polly -- fiercely loyal to the Democratic party as much as to the man for whom she’s worked and, in White’s view, platonically loved for so long -- keeps unofficially working on the Erastus’ campaign for reelection during the primary, especially as she fears his laid-back complacency will lose him the election in favor of upstart state senator Howard C. Norton (Glenn Fitzgerald) whom Erastus had once mentored, now that Democratic party head Dan O’Connell has died.


As it happens, Noonan was the grandmother of New York senator Kirsten Gilibrand of whom there is fleeting reference in the play. (Polly, ever relieving her tensions at the sewing machine, is shown making an outfit for her young granddaughter.) Aggressive as her tactics are, White makes the point that Polly is only doing what men in her position have always done, and for which they are usually admired.


Falco’s galvanic performance remains intensely likeable despite Polly’s short fuse and bossy ways. And it’s the sort of marathon role that makes one admire how actors can memorize such lengthy dialogue. The rest of the cast is uniformly terrific, too, including John Pankow as a slimy would-be party boss whom Polly visits to broker a deal, and Austin Cauldwell as a clueless young man whom Polly puts forth as a committeeman assuming he will make a lifelong commitment to working on their side.


If an up close look at the Albany political machine would not seem to be your thing, don’t worry, “The True” (that title referring to party loyalty) is the stuff of high drama and White’s focus is as much on the personal as the political. Indeed, he seems to be showing us how the two intersect.


The New Group Artistic Director Scott Elliott beautifully balances the drama and the humor with nary a dull moment.