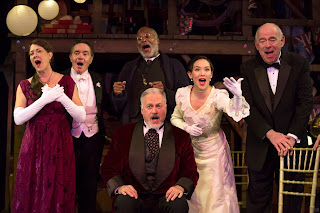 
The most interesting aspect of Gingold Theatrical Group’s fully staged production of George Bernard Shaw’s WWI era masterpiece, one inspired by Tolstoy and Chekhov and dramatizing a complacent upper crust society on the edge of destruction, is textual. Artistic Director David Staller went back to Shaw’s original manuscript and notes to present a more trenchant anti-war piece than the toned down standard version, necessitated by a public eager to forget the carnage of the Great War.


Company namesake Hermione Gingold had apparently written to Shaw in 1940 asking if she might play the piece in a London air raid shelter. This fascinating bit of backstory has inspired Staller to use a World War II Blitz setting as a rather distracting framing device, making a worthily lengthy play even longer. So the conceit of the production would have us in the basement of London’s Ambassador Theatre during an air raid, and we are handed singalong sheets (rather than standard programs) for some tiresome audience sing along (“Pack Up Your Troubles,” “Keep the Home Fires Burning,” etc.) The players decide they'll perform Shaw’s play on a spontaneous request from the audience.


The cast assembled here is comprised of seasoned pros, but ultimately not a patch on the two New York revivals within memory. There was the one at Circle in the Square  in the 1983/4 season with Rex Harrison, Amy Irving, Rosemary Harris and Dana Ivey, later filmed for PBS’s “Great Performances.” And there was another good one in 2006 from Roundabout headed by Philip Bosco.


Alison Fraser and Karen Ziemba are the sharply contrasted daughters of former sea captain Shotover, Ariadne Utterwood and Hesione Hushabye, the former all pretentious airs, the latter warmly maternal to Ellie whom she hopes to save from a marriage of convenience to Mangan.


Raphael Nash Thompson is their seemingly befuddled but ultimately clear headed Shavian prototype father. And Tom Hewitt has some good moments as Hesione’s straying husband who breaks Ellie’s heart. The most wrong-headed piece of casting was Jeff Hiller in drag as housekeeper Nurse Guinness (giving the whole a feel of farcical panto), Ariadne’s brother-in-law and lover Randall Utterwood, and the burglar (that role, incidentally, surprisingly cut in the Circle-in-the-Square production altogether). The part of Guinness is not just a throwaway; in fact, Helen Westley in that role was among those singled out for praise in the play’s 1920 premiere at the Theatre Guild in New York.


Staller is doing commendable work with his monthly Shaw readings, often sharply cast with performers who rarely get the chance to play classic theater. But for a full-out production, one needs more.


Brian Prather’s set does double duty as the theater basement and the Shotover house, usually designed along more nautical lines, as it’s meant to be symbolic of a society at sea. Barbara A. Bell’s period costumes are attractive.


For all its shortcomings, there is still much pleasure at hearing Shaw’s peerless wit and social conscience in full flower.