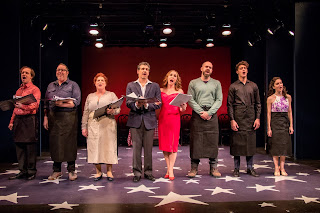 
In the York Theatre’s long-running Musicals in Mufti series, the third time’s the charm for Alan J. Lerner and Burton Lane’s 1979 Broadway flop (done at York in 1996 and 2006). York’s current mounting of the show, based on the same true-life story that inspired the 1968 film “Buona Sera, Mrs. Campbell” -- feels the most fully realized of the revised version (with additional lyrics by Barry Harman) that had its genesis while lyricist Lerner was still alive to approve the modifications to the original lyrics and the text (by Lerner and Joseph Stein).


The plot -- which, as often noted, bears uncanny similarities to the 1999  “Mamma Mia!” -- concerns the pillar of the Italian village of San Forino, one Carmelina Campbell, whose American war hero husband Eddie Campbell was purportedly killed in the second World War, and who had been left with a child Gia to raise. A local cafe owner Vittorio pines for her, but clinging to her grieving widow status and claiming she must remain true to her husband's memory, she keeps him at bay, despite inwardly harboring reciprocal feelings.


Carmelina’s backstory is only a ruse, however, as in fact, she had liaisons with three American soldiers, one of whom is the now grown Gia’s father. But Carmelina doesn’t know which. Meanwhile, she has been receiving child support from all three. When the soldiers return to the town for a reunion, it is not long before the deception is revealed.


The book holds up very well indeed, with really no dull patches. Lane’s Italian-drenched melodies sit well on the ear, and Lerner’s witty lyrics are, of course, exemplary, and the Harmon revisions are melded in seamlessly.


York’s cast is outstanding. Andréa Burns (“In the Heights,” “On Your Feet”) is a warm and persuasive Carmelina singing with an evocatively warm timbre, and like the other Italian characters, maintains a convincing accent throughout. Joey Sorge makes a handsome and amusing Vittorio (this revised version playing up the comic aspects of the role more than the romantic original where the part was played by the Met’s great Cesare Siepi).


Carmelina’s three soldiers are perfectly embodied by Evan Harrington, Timothy John Smith, and Jim Stanek. Their glowing trio “One More Walk Around the Garden,” the show’s most durable song, is gorgeously vocalized, and they have fun with the jaunty “The Image of Me,” wherein they each claim kinship with the engaging Gia, sweetly sung and played by MaryJoanna Grisso.


Anne L. Nathan’s strong turn as Carmelina’s servant and confidante Rosa, who reminds the guilt-wracked Carmelina she is still an upstanding woman, is yet another plus. “I’m a Woman,” originally a solo for Carmelina,” i/s now a duet for her and Rosa, and the two ladies sang it strongly.


Among the song casualties in this edition are “Love Before Breakfast,” “Yankee Doodles are Coming to Town,” and  “Why Him?” but good as those numbers are in themselves, their omission is understandable in this streamlined (and improved) revision. Among the compensations, there’s an added Lane (and Harman) song called “Sorry as I Am.”


The Tony-nominated score is in fine hands under the direction of David Hancock Turner on piano, with Joseph Wallace on bass. And the whole is wonderfully directed by Michael Leeds (who, together with original book writer Stein and Harman, worked on the various York revisions). 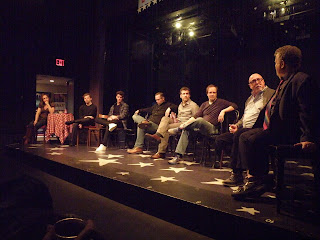 Print this post
Posted by Harry Forbes at 1:46 PM