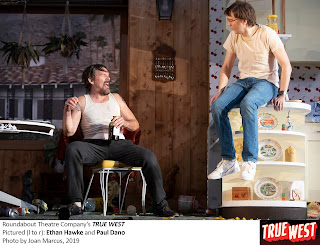 
The late Sam Shepard’s 1980 masterwork, which always seems to bring out the best of its creative team in its revivals, gets another superior mounting in James Macdonald’s gripping production.


As Lee and Austin, brothers who seem poles apart until, as the play progresses, we see they are cut from much the same cloth, are superbly embodied by Ethan Hawke and Paul Dano. (It has been suggested that the dichotomy of the siblings mirrored the two sides of the playwright.)


In the first act, Hawke’s Lee is an ominous, deeply disturbing presence, as he disrupts budding screenwriter Austin’s calm equilibrium in their vacationing mother’s suburban house. Lee is poised to clinch a deal with Hollywood producer Saul (Gary Wilmes) for the screenplay over which he’s long been toiling. But the resentful Lee -- a thuggish small-time house thief -- taunts Austin for his presumed superiority, and thinks he, too, has a story or two that could make a good movie. You just know when Saul arrives for his one-on-one conference with Austin, that Lee will co-opt the producer who, as it develops, finds in Austin a more “authentic” writer. Among Shepard’s clever conceits, the Western story Lee outlines to Austin subtly mirrors the dynamic between the brothers.


Matters go downhill from there. But the victimized Austin -- who, it seems, has always envied his freewheeling sibling -- eventually reaches the breaking point, and the more humorous second act, sees a dramatic role reversal and the simmering tensions between the two erupt into physical violence (all expertly choreographed by Thomas Schall).


Marylouise Burke makes a late play appearance as the boys’ dotty mother, pointedly characterized by Shepard so you can see the genetic connection between the lady and her unruly sons.


Mimi Lien’s set, encased in an illuminated frame, is the picture of neat suburban domesticity, and an ideal setup for the chaos that ensues, all authentically lighted by Jane Cox. Kaye Voyce’s costumes perfectly nail the characters.


Both Hawke and Dano delineate their parts masterfully, but Hawke’s hothead Lee is a marvel of brutish physicality and disingenuous craftiness. I don’t think he’s ever given a finer, more detailed performance. You can see the wheels turning as each brother tries to manipulate the other. The recurring business about Lee wheedling the car keys from Austin is one such instance. Dano creates a more milquetoast character, but his character reversal in the second act is all the more effective.


Macdonald brilliantly captures Shepard’s rhythms and creates a taut and appropriately disturbing evening, though emphasizing the menace over the humor. The slow-building first act almost plays out like Stephen King tale (and it's plenty nerve-wracking), but when the narrative demands it, he doesn’t fail to capture the black comedy in the horrifying events.