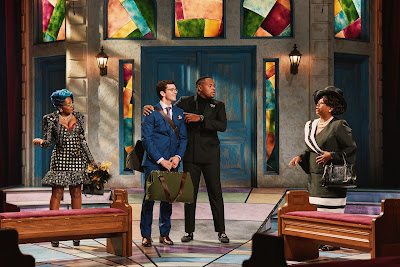 A fractured family gathers for the funeral of their patriarch, and comic mayhem ensues in playwright Douglas Lyons’ very funny and genuinely touching  “Chicken & Biscuits,” which premiered at the Queens Theatre in 2020 just before the pandemic. The title, if you were wondering, refers to the deceased’s favorite dish.

When the play begins, elder daughter Baneatta (Cleo King), a self-righteous church lady, is nervously pacing the stage as she frets about the imminent service for her father, who had been the church pastor, a role now taken by her husband Reginald (Norm Lewis). Baneatta’s estranged younger sister Beverly (Ebony Marshall-Oliver) meanwhile prepares for the service decked out in  a flashy and overly revealing outfit, while her gawky almost-16-year-old daughter La’Trice (Aigner Mizzelle) stresses about not wanting to see her grandfather laid in the ground, and once at the church, constantly complains about being hungry. Beanetta’s gay actor son Kenny (Devere Rogers) inisists that his Jewish boyfriend Logan (Michael Urie) come to the service for moral support, though the nervous Logan fears the barely concealed disdain of Beanetta, an attitude shared by Kenny’s sister Simone (Alana Raquel Bowers) who arrives with her own emotional baggage, the man in her life having just left her.

The stage is set for fireworks, and those underlying tensions are pushed to the breaking point with the arrival of a mysterious stranger (Natasha Yvette Williams).

The setup is formulaic to be sure, and some of the scenes seem repetitive and protracted, but Lyons’ writing and the production as a whole are so sharp and the overall tone so warm-hearted that the audience happily goes along for the ride, responding on cue like a sitcom audience. There are audible “Aws” for the tender and sentimental moments, applause for some of the snappy putdowns and other crowd pleasing moments, and congregation-like responses to the pastor’s fervent eulogizing. 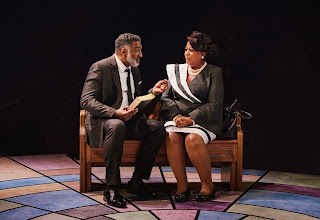 The cast is a delight across the board. Lewis is solid in a rare onstage non-singing role, making a dynamic preacher and a loving if exasperated husband. King’s Beanetta is a model of stiff-backed rectitude. Marshall-Oliver and Mizzelle make a hilarious mother and daughter combo. Marshall-Oliver’s antics at her father’s coffin are a rib-tickling show in themselves, but she simultaneously conveys a caring persona. Urie is a laugh riot as usual, milking every bit of Logan’s discomfort.

Lawrence E. Moten III’s settings make good use of the elongated Circle in the Square stage, the interior and exterior of the church, and the characters’ homes. During the church scenes, illuminated stained glass windows appear on the theater’s back walls. Dede Ayite’s costumes are pitch perfect.

Zhailon Levingston, who has the distinction of being the youngest black director on Broadway, brings out all the humor of Lyons’ script and elicits perfectly judged performances from all concerned.

The audience at my performance had a rollicking good time, and I suspect you will, too. Sitcom-like or not, there’s substance here and, in fact, it’s not so different in tone from the works of Neil Simon and Alan Ayckbourn. The play’s family dynamics ring true, with the emotions and themes of family strife and ultimate forgiveness are widely relatable.

(Circle in the Square Theatre, 235 West 50 Street; ChickenAndBiscuitsBway.com; though January 2, 2022)

Print this post
Posted by Harry Forbes at 7:45 AM