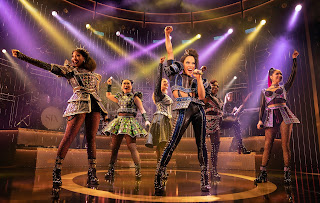 The West End hit which puts the six wives of Henry VIII center stage in the context of a Spice Girls-like concert started previews just before the pandemic shut down Broadway. Now it has opened to generally glowing reviews and a vociferous fan base of teenage girls who, masks or not, scream their heads off throughout the 85 minute show.

Fashioned like a rock event more than a traditional Broadway musical, the diverse and talented American cast, eschewing English accents, wins the audience over from the get-go, as they emulate the moves of the pop icon inspiration for each character: Catherine of Aragon (Beyoncé and Shakira); Anne Boleyn (Lily Allen and Avril Lavigne); Jane Seymour (Adele and Sia); Anna of Cleves (Nicki Minaj and Rihanna); Catherine Howard (Ariana Grande and Britney Spears); and Catherine Parr (Alicia Keys and Emeli Sandé).

Even if you’re not fully conversant with today’s pop divas to appreciate the show on that particular level, Toby Marlow and Lucy Moss’s songs are undeniably catchy, the lyrics not without wit, and with just enough historical ballast to support the unusual concept. Paul Gatehouse’s sound design is understandably pitched at rock concert decibels, which I found more than a bit uncomfortable. I would have liked to hear more of the lyrics. “I guess he just really liked my head,” declares Anne (an amusing Andrea Macasaet) cheekily at one point. A post-show listening to the score on Spotify with its ideal sonic balance affirmed the score’s quality, making me wish it had come across with the same clarity in the theater.

After the opening number, “Ex-Wives,” which has something of the vibe of “He Had It Coming” from “Chicago,” each queen presents her big number in the style of the inspiration listed above, with only a soupcon of period “Greensleeves” in the underscoring. And it was a welcome relief after the non-stop music when Jane Seymour (a touching Mallory Maedke) prefaced her powerful number “Heart of Stone” with a spoken introduction. So, too, there’s further spoken dialogue from Anna of Cleves (a sassy, strutting Brittney Mack) soon after.

The conceit of the show has the wives competing against each other as to who got the worst hand from the marital monarch. An amusingly petulant Anne thinks it must be she as she lost her head (though she faces competition from Katherine Howard (Courtney Mack) who would later meet the same fate). Jane, said to be the “only one he truly loved,” would die in childbirth. The marriages to longest wife Catherine of Aragon (Adrianna Hicks who kick starts the show in commanding fashion) (24 years), and Anna (whose portrait by Holbein first sparked Henry’s fancy until he met her in person and he lost interest) ended in divorce. And lastly, there’s Catherine Parr (a touching Anna Uzele) who, as she repeatedly affirms, survived.

“Six the Musical” is, as you might have gathered, a far cry from the classic BBC/PBS series “The Six Wives of Henry VIII,” and the script puts the wives in a defiantly contemporary feminist perspective positioning the show as a rousing affirmation of girl power.

The script seems ready made to travel with some pandering location place holders. “How you doing tonight, New York (or presumably any other city where the show eventually happens to tour)!”

Courtney Mack’s “All You Wanna Do” is one of several earworms. And Uzele’s Catherine wraps up the wives’ recitations with a strong “I Don’t Need Your Love.” The string of solo turns is broken by a concerted disco number “Haus of Holbein” -- neat choreography by Carrie-Anne Ingrouille -- just before Anna’s solo.

Print this post
Posted by Harry Forbes at 8:15 AM