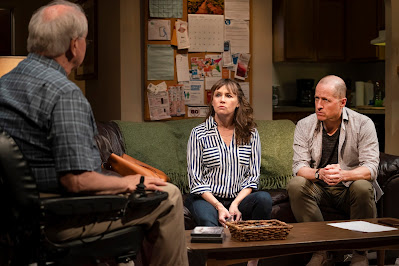 Here’s a gripping adult drama from Pulitzer Prize winner Bruce Norris (“Clybourne Park”) about four sex offenders -- all of whom have served their time in prison -- now living in a halfway house somewhere in Downstate Illinois. When the play opens, Andy (Tim Hopper), in tandem with his wife Em (Sally Murphy), has come to confront Fred (Francis Guinan) who, as a piano teacher, had abused Andy when the boy was 12, kickstarting the drama into high gear.

As Andy nervously summons the courage to read the prepared statement articulating the hurt and guilt he feels every day, we meet the other residents: Gio (Glenn Davis), a fast-talking entrepreneurial type barreling over other conversations; Felix (Eddie Torres), a reclusive depressive who emerges from his screened off room only when necessary to use the bathroom or kitchen; and Dee (K. Todd Freeman), a former musical performer who warily watches over the activities in their apartment, and is particularly protective of Fred, now severely disabled.

Eventually, we meet Ivy (Susanna Guzmán), the tough but empathetic probation officer for the residents, who visits to make sure that all the men are abiding by the highly restrictive rules, which include no alcohol, cellphones, internet, or women. And in the second act, Gio comes home with Effie (Gabi Samels), a drug-taking co-worker from the Home Depot where they both work.

The brilliance of Norris’s work here, beyond the sparky dialogue and compelling arguments weighing matters of justice and retribution, lies in creating characters that defy stereotypes. The perpetrators are not the monsters you might imagine (though their crimes are not for one second minimized), and even the victim, as personified by Andy who eventually shows himself to be hellbent on vengeance, is not as fully sympathetic as he might be drawn in another telling.

The cast is uniformly superb. In fact, the men all originated these roles at Steppenwolf in 2018, and then London’s National Theatre.

This is a tough one to watch -- the language is occasionally raw as befits the subject matter, and some may feel that empathy and nuance should be solely focused on the victim -- but the themes are profoundly thought-provoking and the drama never ceases to grip.

Print this post
Posted by Harry Forbes at 10:21 AM