The 1972 Jule Styne-Bob Merrill musical “Sugar” -- based, like the current offering, on Billy Wilder’s riotous 1959 film -- had its pleasures, but truthfully the score was not top drawer for either gentleman. Still, thanks to the amusing performances by Robert Morse, Tony Roberts, and Cyril Ritchard and Gower Champion’s slick direction, it eked out respectable runs here in the U.S. and elsewhere. (Tommy Steele headed a 1991 UK revival with a revamped script and playlist.) A domestic revival with the film’s Tony Curtis playing millionaire Osgood Fielding, Jr. got some traction in 2002.

But the new version -- with its tuneful 1930’s pastiche score by the “Hairspray” team of Marc Shaiman and Scott Wittman -- is a crowd-pleasing winner all the way. With a wonderfully astute book by Matthew Lopez and Amber Ruffin, which cleverly skirts any current wokeness pitfalls, but does so in a refreshing, understated way, this version comes out way ahead.

Director-choreographer Casey Nicholaw keeps things moving and dancing non-stop, faltering only in a protracted chase sequence near the end which simply goes on too long. And the diverse cast creates their own magic.

Christian Borle and J. Harrison Ghee are Joe and Jerry, the Prohibition era musicians who don drag attire to avoid the mob boss (Mark Lotito) who knows they witnessed a rubout (though not, as in the original, the St. Valentine’s Day Massacre). They join the all-girl band led by Sweet Sue (a show-stopping Natasha Yvette Williams).

Joe (now Josephine) falls hard for Sugar (the Marilyn Monroe character now embodied by the appealing Adrianna Hicks who makes the role her own). Jerry (now Daphne), for his part, finds the impersonation suits him to a tee. So when he catches the eye of millionaire Osgood (hilarious Kevin Del Aguila), the match is delightfully plausible. When Joe woos Sugar out of drag, he affects an amusing German accent rather than the Cary Grant impersonation of Curtis in the film.

The score contains one tuneful number after another, and each character given multiple chances to shine. From Sugar’s bluesy  “A Darker Shade of Blue” to Osgood’s “Fly, Mariposa, Fly” to Joe’s “He Lied When He Said Hello,” and just about everything Sue belts out. But the biggest hand of the evening goes to Daphne’s self-revelatory soliloquy, “You Coulda Knocked Me Over With a Feather,” which brings down the proverbial house.

I may be alone in this but, throughout the show, I kept hearing the strains of the Burton Lane-Frank Loesser song “The Lady’s in Love With You.” I don’t know if that was mere coincidence or some kind of subtle homage, but that song was introduced in the  Bob Hope 1939 film called “Some Like It Hot.” not related to the Wilder movie at all. There are, as well, echoes of previous Shaiman tunes like "Big, Blonde, and Beautiful" from "Hairspray." 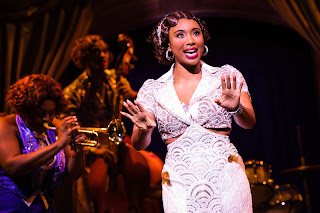 Scott Pask’s sets, Gregg Barnes’ costumes, and Natasha Katz’s lighting are solidly flashy and top-drawer Broadway quality as you’d expect. But Brian Ronan’s sound design was pitched way too loud for the musical numbers. With material as strong as this, there’s no reason to artificially pump up anyone’s adrenalin. At my performance, several friends sitting in different parts of the house complained they couldn’t make out the lyrics as the sound was so overloaded.

This is an increasing problem with musicals these days, but it’s especially puzzling for a throwback score such as this.

Anyone curious about Jule Styne’s “Sugar,” incidentally, will get the chance to make a comparison when the plucky J2 Spotlight Musical Theater Company revives it in April at its Theatre Row venue.

Print this post
Posted by Harry Forbes at 1:50 PM