The Boys: The Sherman Brothers Story 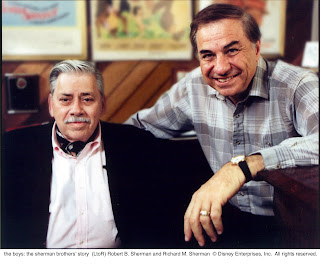 The last time producer Walt Disney saw Richard Sherman and Robert Sherman -- the composers of "Mary Poppins" and "The Jungle Book" and the only songwriters he ever had under contract -- he called out to them, "Keep up the good work, boys."

The brothers sensed something was greatly amiss as Disney's remark seemed atypical, and indeed, the animation pioneer would soon be dead from cancer. But "the boys" would continue their prolific output with scores for his studio and others such as "Bedknobs and Broomsticks," "Charlotte's Web," "Chitty Chitty Bang Bang" and many more.

"The Boys: The Sherman Brothers Story" (Disney) is a most poignant biography. The big revelation here is that all those cheery, kid-friendly songs belied a deeply fractious personal relationship between two radically different personalities. As Dick says early on, "We perpetuated a fraud for 50 years."

The "romantic" Bob and the "sentimentalist" Dick were as temperamentally divergent as the Beatles' John Lennon and Paul McCartney in their shadings of darkness and light.

Directed by their sons, Jeffrey C. Sherman and Gregory V. Sherman (whose families were estranged during their growing-up years), the well-crafted documentary -- which includes interviews with Julie Andrews, Dick Van Dyke, Angela Lansbury, Lesley Ann Warren, Hayley Mills and other Disney alumni, as well as friends and family members -- attempts to trace the roots of the conflict between these two disparate personalities.

Certainly Bob's experiences during World War II -- his unit was among the first to arrive at the notorious Dachau concentration camp -- and Richard's volcanic temper, which once led him to overturn a piano, had some bearing. Bob had originally wanted to be a novelist, Dick yearned to write symphonies, and yet, as their father, songwriter Al Sherman, knew, their strength lay in their unique partnership.

Most of the screen time is given to the brothers, Richard living in Los Angeles, and the now-widowed and infirm Robert in London, who finds solace, not in writing, but in creating striking paintings. Yet, despite the geographic distance, their reminiscences are remarkably in harmony.

Throughout, there are copious clips from their most famous films, and their signature songs like "A Spoonful of Sugar," "I Wanna Be Like You" and the Disneyland perennial "It's a Small World (After All)."

Though there is nothing overtly objectionable about the film, this is one Disney release that's best suited to older viewers who can better understand the complexities of the brothers' dysfunctional -- but, at heart, caring -- partnership, and also discern the mutual respect and love beneath the strained surface. Print this post
Posted by Harry Forbes at 12:54 PM