Ghosts of Girlfriends Past 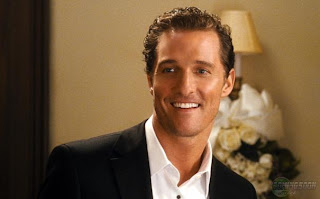 If Charles Dickens were still around to collect the royalties for every use that's been made of "A Christmas Carol," he'd surely be giving J.K. Rowling a run for her money, and then some.

In "Ghosts of Girlfriends Past" (Warner Bros.) -- a contemporary riff on the story, though this time sans Christmas and the Victorian author's unerring good taste -- heartless womanizing bachelor Connor Mead (Matthew McConaughey) has the Scrooge role, and it's marriage and fidelity rather than the yuletide spirit that he scorns.

Connor is visited by the ghosts of his sleazy playboy Uncle Wayne (Michael Douglas) and those of his jilted girlfriends -- junior high dalliance Allison (Emma Stone), his assistant, Melanie (Noureen DeWulf), and a silent specter of the future (Olga Maliouk) -- on the eve of the Newport, R.I., wedding of his brother, Paul (Breckin Meyer).

Celebrity photographer Connor -- bluntly, a macho pig (and kudos to McConaughey for playing him so unsympathetically) -- so barely tolerates the ritual his brother is about to endure that he refuses to offer the customary toast. Sandra's randy bridesmaids are hoping to score sexually at the wedding, and have their collective eyes on Connor -- who, in a particularly yucky scene, attempts to seduce, of all people, the mother of the bride. (She coolly rebuffs him.)

Predictably, and much like his Dickensian forebear, best man Connor comes to a full realization of the depth of his feelings for his childhood sweetheart, Jenny (Jennifer Garner), the maid of honor.

There's ultimately (and predictably) a wonderfully redemptive outcome and a strong affirmation of marriage and fidelity. Connor is allowed to witness the wedding party's conversation; he hears Paul speak lovingly of how his brother looked after him when their parents were killed in a crash while they were still youngsters. The invisible Connor looks on tearfully, and in that moment, the film begins to show genuine heart.

Later on, when Connor sees the error of his ways, there are a couple of superlative scenes for the reformed McConaughey, who here demonstrates -- as he did playing the football coach in true-life drama "We Are Marshall" -- what a fine and very honest actor he can be beneath the surfer looks and washboard stomach.

It's a shame, then, that Jon Lucas and Scott Moore's script is marred by so much crude humor until then. A classier approach -- suggesting the character's prodigal ways less offensively -- would have been far preferable.

The final moments of the film -- directed by Mark Waters -- are genuinely touching, but it's a long slog through coarseness till then. Print this post
Posted by Harry Forbes at 1:42 PM