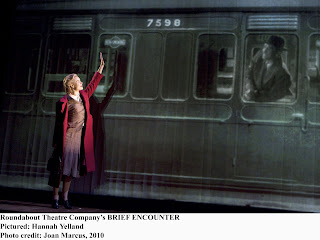 Having seen the Kneehigh Theatre’s highly imaginative, impressionistic take on the classic Noel Coward/David Lean film in London, I feared that its transfer to these shores – particularly at a large house like Studio 54 – would result in a loss of the charm and authenticity of the British mounting.

The recreation of a 1930s British cinema with cast members doubling as audience buskers and ushers, serenading the patrons, and then assuming parts in the story is, in fact, slightly diminished simply given the size of the theatre – by all accounts, not a problem at the more intimate St. Ann’s Warehouse in Brooklyn last year – but thankfully, in every other respect, the impact of this lovely production is undiminished.

Despite the novelty of the multi-media staging – characters stepping out of a black and white movie screen, breaking into song and stylized movement -- and the occasional slapstick (augmenting Coward’s original light moments), this isn’t meant to be a send-up of the film like that other British import, “The 39 Steps.”

The central love story here – a housewife and a doctor (both married) meeting in a train station when he removes a bit of grit from her eye, and in that and subsequent meetings falling more deeply in love, while grappling with increasing guilt – is played with utmost seriousness. Hannah Yelland and Tristan Sturrock as lovers Laura and Alec are as repressed and tenderly impassioned as Celia Johnson and Trevor Howard in the film.

Director Emma Rice (artistic director of Kneehigh) has adapted the film script – itself taken from Coward’s one-act “Still Life,” one of the playlets comprising his three-evening “Tonight at 8:30” anthology – and done so in a way that I think would have pleased Coward very much. Her work doesn’t distort the source material, in the way of, say, Ivo van Hove’s bizarre deconstruction of “The Little Foxes” at New York Theatre Workshop, but enhances it cleverly and movingly.

In fact, with crashing waves and symbolically liberating water projected on the drop, and a pulsating musical score, the romance is heightened to the nth degree.

The use of music – all Coward lyrics but, in some instances, excellent new tunes by Stu Barker – provides amusing and poignant counterpoint to the action. A gorgeous rendition of “Go Slow, Johnny” accompanies an unconsummated tryst between Alec and Laura, as they undress after getting soaked in a rowboat, and then chastely resisting their impulses, dress again. That sequence is one of many breathtaking moments.