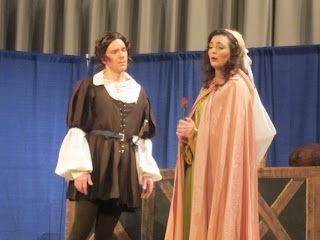 The plucky Light Opera of New York continued its second full season with Rudolf Friml’s once enormously popular swashbuckling tunefest “The Vagabond King,” and as with its season opener, “The Desert Song,” succeeded beyond expectation – despite modest resources --in putting over an ambitious piece with aplomb.

For those unfamiliar with the piece, either through its rarely-screened movie versions or infrequent revivals (Village Light Opera Group and Light Opera of Manhattan’s 70’s productions were the last local ones I recall), it’s the fictionalized story of Francois Villon, the 15th century poet and thief, his wooing of Louis XI’s cousin Katherine De Vaucelles, his promotion to Grand Marshall and then elevation to “king for a day,” and finally, his audacious defense of France against the invading forces of the Duke of Burgundy.

The musical is based on Justin Huntley McCarthy’s novel and subsequent play “If I Were King,” itself memorably filmed with Ronald Colman.

“Someday,” “Love Me Tonight,” and “Only a Rose” continue to be staples of the operetta concert repertoire (or what’s left of it today), and they were superbly sung here by Kristin Vogel and Nathan Brian as the noble heroine and roguish hero. The voices blended beautifully, and they gave as good as accounting of those numbers as I’ve ever heard, and did well dramatically, too.

After camping it up as the comic Benny in “The Desert Song,” the versatile Brian proved a solid leading man on this occasion. Vogel conveyed Katherine’s regality and poise impressively, thinly written though the role is.

Erick Castille – the Red Shadow of “The Desert Song” – made an atypically youthful monarch, usually referred to in the original script as “old King Louis,” but his casting helped underscore the triangular romantic setup. Tenor Matthew Hughes as Rene made the most of his “My dear old mother” solo in the opening chorus.

Sarah Best was well cast as the lusty Huguette who selflessly loves Villon, and delivered a solid “Love for Sale,” though she seemed to hold back in her second act “Huguette Waltz.”

David Macaluso was amusing as Villon’s comic sidekick Tabarie, and vocalized the first act drinking song with panache. Later, he and Michael McAvoy provided one of the score’s lighter moments in their comic serenade to Lady Mary (Katie Hall).

With a couple of exceptions, most of the cast projected well in the cavernous church venue, though there were some complaints about audibility from the back rows.

As usual, Lydia Gladstone – who just finished a stint as FDR’s mother in Rodgers & Hart’s “I’d Rather Be Right” at Musicals Tonight – provided the very attractive costumes.

Gary Slavin directed with the customary style he’s brought to all these LOONY productions, and Stephen Vasta’s piano accompaniment and musical direction of the five-piece String CollectiveNYC went a long way to making one forget the presence of a full-sized orchestra. Similarly, the chorus of eight made a surprisingly full-bodied sound.

The production was not quite as faithful to the original text or score as “The Desert Song” had been, but adapter Alyce Mott’s tasteful condensation made perfect sense for a reduced staging such as this, and even with trimming, it was a very full evening.

Despite its popularity, I’ve always deemed “The Vagabond King” far less potent than the major Romberg works of the era, like “The Student Prince” (coming up, incidentally, on May 19), not to mention Friml’s own “Rose-Marie” with the latter’s innovative use of underscoring. But LOONY’s enjoyable production made a good case for it.