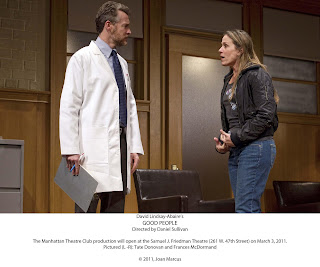 David Lindsay-Abaire, currently represented onscreen by a superb adaptation of his Pulitzer Prize-winning play, “Rabbit Hole,” has come up with another winner in “Good People,” an enjoyable play with many of the same attributes as “Other Desert Cities”: a well-constructed, old-fashioned (in the best sense) play with juicy roles that make its cast shine.

And though comparisons are famously odious, I find Lindsay-Abaire’s plot much more absorbing than the Jon Robin Baitz work.

Topping a first-rate cast is Frances McDormand as Margaret, a South Boston cashier who’s been reluctantly fired for frequent lateness by her young boss Stevie (Patrick Carroll), though he’s known her all his life and is fond of her.

She pleads for another chance, as she’s usually detained only because of caring for her adult, mentally challenged daughter. But pressured by his superior, Stevie has no choice but to let her go.

When her friend Jean (Becky Ann Baker) runs into Margie’s old high school flame Mike (Tate Donovan), now a doctor, Margie is persuaded to visit his office and plead for a job, which she does with her characteristic aggressiveness.

When Mike honestly tells her there’s nothing available in his office, she needles him about having pulled himself out of the Southie environment into “lace curtain” society. He denies it, but it’s clearly a sore point.

Eventually, encouraged by her friend Jean and landlady Dottie (Estelle Parsons), both bingo-playing buds (and both of these actresses are terrific), she elbows her way into Mike’s posh Chestnut Hill house which he shares with his younger wife Kate (Renée Elise Goldsberry). Lindsay-Abaire sets the stage for confrontation but nicely avoids the predictable.

McDormand is just superb, Southie accent and all, capturing both the likable and less-than-admirable aspects of Margie. Donovan and Goldsberry skillfully telegraph the troubled undercurrent beneath their seemingly congenial marriage. And Carroll brings a likable quality to Margie’s bingo-playing ex-boss.