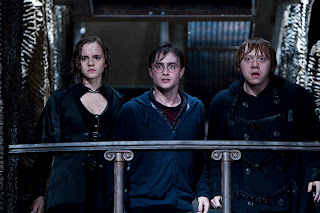 In reviewing the more reflective Part 1 of “Harry Potter and the Deathly Hallows,” we predicted the sequel would undoubtedly make up for the slow patches in spades (or words to that effect), and indeed it has.

With this eighth and final film in the J.K. Rowling adaptations, we can sit back and marvel at the remarkable consistency of quality that has marked the series all along, and also wonder at the perspicacity of the casting agents who chose their three young stars so exceedingly well, for Daniel Radcliffe (Harry), Emma Watson (Hermione), and Rupert Grint (Ron) have matured quite beautifully and just as they should over the past decade, matching their characters perfectly.

It’s almost nostalgic to see Radcliffe once more in his familiar Potter spectacles, now that he’s moved on to the Great White Way, proving himself a surprisingly adept song and dance man in “How to Succeed in Business Without Really Trying.”

The movie at hand is slickly done with marvelous effects and nary a dull moment. If anything, there may be a bit too much action crammed by scriptwriter Steve Kloves into its 130 minutes. The digital effects by Tim Burke are marvelous. What a long way we’ve come since the stop-action animation of early films like “King Kong”!

But the script is careful to keep the strong bond among the friends, and Harry’s loyalty to his deceased parents front and center so that we still care about our heroes amidst all the distracting flashy effects.

The main thrust here, as fans know, is the young wizards’ mission to find the four remaining so-called Horcruxes that each holds a piece of dastardly villain Lord Voldemort’s (Ralph Fiennes) soul. The “deathly hallows” are the objects that coveted by Voldemort, especially the Elder Wand that he believes will ensure his supremacy.

Along the way to the fight to the death conclusion (and we won’t say whose), our young protagonists must break into a high security bank vault booby-trapped by a multiplying treasure trove threatening to crush them, outwit a giant dragon, navigate a secret passage to Hogwarts, face a resentful ghost, escape the pursuing flames in a overstuffed supply room, and help defend Hogwarts from the invading Death Eaters,

Most of the favorites from the earlier films are back: Robbie Coltrane, Michael Gambon, John Hurt, Jason Isaacs, Gary Oldman, Alan Rickman, David Thewlis, Julie Walters, and a most delightful Maggie Smith. Some of these are only on screen for a few minutes, but the luxury casting speaks to the continued attention to detail that has characterized each film.

The film is confidently helmed by David Yates, though that's no surprise as did the last three installments so well.

I screened the film in 2D, not its 3D alternative, but found the experience quite engulfing enough without the bother of gimmicky glasses.

(The film has been rated PG-13 by the MPAA for some sequences of intense action violence and frightening images.) Print this post
Posted by Harry Forbes at 7:46 PM