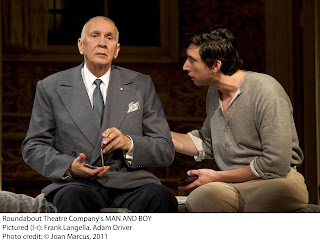 Some may disdain Terence Rattigan as dated and irrelevant (a sentiment I emphatically don't share), but surely even his critics can't deny the solid construction, effectiveness, and sheer entertainment value of his works, as a recent spate of London revivals commemorating his centennial have demonstrated.

So, too, the present Roundabout revival of his 1963 play about a corrupt Romanian financier and his estranged son proves quite mesmerizing despite, or even because of, its melodramatic trappings.

The play is set in 1934. Gregor Antonescu, played magnificently by Frank Langella, is on the brink of financial ruin. He contrives to visit his son Vasily (Adam Driver) with whom he had a terrible row five years earlier.

The latter, who has assumed the name Basil Anthony, earns his living as a lowly lounge pianist and lives in a Greenwich Village basement apartment. He has an actress girlfriend (Virginia Kull) who knows nothing of his background.

Antonescu shows up, accompanied by his sidekick Sven (Michael Siberry). Langella’s entrance – overcoat collar upturned, and a concealing fedora – heralds a great star turn, and indeed it is. This is a vivid portrayal of a charming but manipulative and emotionally repressed figure. The part was written for Charles Boyer and played to acclaim by David Suchet in a 2005 London revival, also directed, as this so finely is, by Maria Aitken.

The great man has arranged for Mark Herries (Zach Grenier) -- an American magnate who, in light of Antonescu’s financial instability, has called off a proposed alliance – to meet him there.

Antonescu has built his fortune on the principles of liquidity and confidence, both now in seriously short supply. But he has discovered that Grenier has a certain vulnerability, and comes up quite a diabolical way to use it to his advantage. Let’s just say what happens next belies the accusation that Rattigan shied away from themes that might compromise his own closeted sexuality.

Though Langella is so magnetic, he is not the whole show. Driver is completely convincing – physically and dramatically -- as Basil, conflicted by his revulsion of his father’s methods, but adoring him throughout. Kull makes the girlfriend – who takes the news about her boyfriend’s lineage with surprising equanimity – also believable. Siberry, too, offers solid support, proving again a great asset to any production in which he’s cast.

The second act is rather less unconventional than the first, though it introduces the character of Antonescu’s second wife (Francesca Faridany good in a rather stock role), as well as a further obstacle to the financier’s monetary reformation.

Rattigan could have easily called this play “Father and Son” and certainly, as far as dramatizations of that eternal conflict go, this is one of the most intriguing. And for American audiences, the parallels to the Bernie Madoff scandal add further resonance.