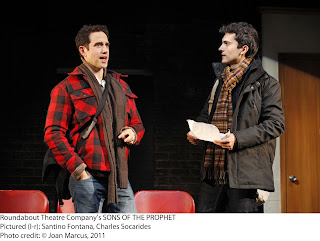 This fine and deeply affecting play by Stephen Karam – commissioned by the Roundabout as part of its New Play Initiative for emerging and established artists – will surely rank as one the best of the 2011-2012 season. And it marks the occasion of another treasurable performance by the impressively versatile Santino Fontana who shone, most recently, in Roundabout’s “The Importance of Being Ernest” last season.

In the play’s early moments, we learn his father dies of a heart attack one week after swerving to avoid what he thought was a deer while driving. In fact, the animal was on a stuffed decoy placed on the road as a prank by Vin (Jonathan Louis Dent), a local football star who had been raised in a foster home, and whose juvenile sentence is postponed till after football season. This becomes a point of contention in the town, one ultimately debated in the play’s climactic scene, a town meeting.

Joseph is beset by various health ailments, and sorely needs the insurance he gets from working for the scattered, self-absorbed Gloria, a lady who, comically, knows no boundaries. But he faces his various adversities with humor and resilience, as misfortune seems to beset his family at every turn.

When Gloria discovers his ethnic heritage and learns that his family is distantly related to Kahlil Gibran, she sees a way to boost her failing business: a memoir about Joseph’s family geared to their tenuous connection to the famed author of “The Prophet.”

Karam has ingeniously structured the play along the lines of that book with projected headings “On Pain,” “On Friendship,” “On Work,” etc. But for all the Big Issues explored in the play – suffering, sickness, death, loneliness – the play is never heavy-handed, leavened as it is by humor throughout.

Besides Fontana’s fine work, Chris Perfetti shines as the campy younger brother with a spiritual bent, influenced no doubt by their father who revered the Lebanese Maronite St. Rafca, canonized for her suffering, and whose portrait looms in the upstairs bedroom.

Also excellent are Charles Socarides as a reporter covering the hearings about the car accident and who shares a history with Joseph from high school days; and Dee Nelson and Lizbeth Mackay is various roles.

The play is finely directed by Peter DuBois who, like his cast, is ever sensitive to the frequent funny-sad shifts. Production credits are first-rate including Anna Louizos’ split-level set, Bobby Frederick Tilley, II’s costumes, and Japhy Weideman’s lighting.

I didn’t catch Karam’s first well-received play for the Roundabout – “Speech & Debate” – but clearly, he is an exciting playwright with a bright future.