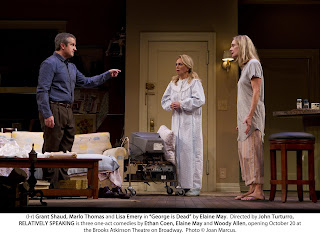 The three one-acts that make up this evening of dysfunctional family comedies are a mixed bag, but never less than amusing.

The problem with the first – Ethan Coen’s “Talking Cure” – is that it ends too abruptly, but what there is of it is intriguing. You have Larry, a patient in a mental hospital (Danny Hoch) – a postal worker who, we learn, went “postal” -- being interrogated in a series of a short blackout scenes by a doctor (Jason Kravits) fighting a losing battle with his overly verbose patient.

Then there’s a flashback cutaway to Larry's parents (Allen Lewis Rickman and Katherine Borowitz) when she was pregnant with Larry, and we understand how he turned out as he did. Both halves are funny and sharply played, but one longs for more of a wrap-up, perhaps a return to the doctor and Larry for the final coda. Still, this is an intriguing curtain-raiser.

The second (and most solid of the trio) is Elaine May’s “George is Dead.” In this, wife Carla (Lisa Emery), currently at odds with her teacher husband (Grant Shaud) who resents that he takes second fiddle in her life, is anxiously waiting for his return home after a lecture of his she missed. There's suddenly a pounding on the door, and in comes Doreen, a pampered, self-absorbed chatterbox (Marlo Thomas) whose husband has just died in a skiing accident. It happens that Carla’s mother was Doreen’s childhood nanny. Deep seated resentments surface with funny and poignant results.

All the players, including Patricia O'Conncell as Carla's mother, are fine, but Thomas is brilliant, nailing Doreen’s childish needfulness to a tee.

With snappy one-liners and a promising premise, Woody Allen’s “Honeymoon Motel,” which comprises the entire second act, seems to be the crowd pleaser, based on post-show chatter.

This is vintage Allen in high farce mode with a Borscht Belt gags abounding. The problem is that farce needs to be grounded in more initial reality than Allen has constructed here, and the one-liners are not very organic on such an implausible foundation.

John Turturro directs all three playlets sensitive to the varying tone of each, and draws sharp performances from his cast

Santo Loquasto goes to town with the kitschy motel set of the second act, but Clara’s cluttered middle class apartment and Larry’s parents’ wood-paneled dining room are all right on target, as are Donna Zakowska’s apt costumes, and Kenneth Posner’s lighting design.

“Relatively Speaking” is tailor-made for the proverbial tired businessman, that's for sure, but there are moments, particularly in the more literate Coen and May pieces, that strike chords on a higher level.