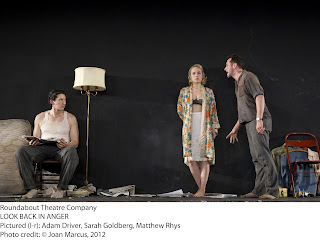 This is not, as they say, your grandfather’s “Look Back in Anger.” Director Sam Gold has pared down the play, eliminating one character, conventional scenery, and most of the playing area. (The action takes place entirely downstage in front of an austere black wall.)

University educated, lower-class Jimmy Porter (Matthew Rhys), the original “angry young man,” -- more or less, based on playwright John Osborne himself -- lives with his wife Alison (Sarah Goldberg) and Welsh buddy Cliff (Adam Driver) in a comfy, non-sexual ménage a trois, over the candy store he runs, steadfastly refusing to strive for anything more exalted.

He rails against the bourgeois establishment with its maddening complacency, taking it out primarily on his long-suffering, upper crust wife. Alison’s efforts to tell Jimmy that she’s pregnant are continually thwarted, and eventually she leaves him to find “peace.” Her actress friend Helena (Charlotte Parry), who had been an unwanted (by Jimmy) house guest, summarily takes her place.

In Gold’s concept, Jimmy and Alison have a sort of Stanley Kowalski/Stella kind of dynamic. He’s something of a brute but she loves his animal magnetism. Alison’s relationship with Cliff, platonic though it may be, involves much affectionate fondling and kissing.

Josh Marquette’s setting is squalid in the extreme, and the emotions are heightened throughout. When I got home after seeing it, I pulled out a videotape of a TV production with a young Kenneth Branagh and Emma Thompson – directed by Judi Dench – and it seemed almost as genteel as “Downton Abbey” by comparison.

Frankly, I’m not sure Osborne would have approved Gold’s radical concept or recognized the characters or the slum-like setting quite as his own, and yet, his dialogue certainly bristles in a way I haven’t quite heard before. And that includes the Roundabout’s own revival with Malcolm McDowell years ago. I suspect a straight reading of the play might now register as staid as the conventional dramas "Look Back in Anger" was primed to usurp. Here, one certainly gets the flavor of what made the original so shocking. And the human emotions ring true.

Matthew Rhys is absolutely brilliant as Jimmy, even if he’s been directed to play up the intensity. Still, he radiates charisma and star quality, with a sonorous voice that suggests Richard Burton (who played Jimmy in the movie).

Fight director Thomas Schall has staged the frequent physical scuffles between Rhys and Driver (the taciturn but stronger Cliff usually getting the upper hand), with a wonderful naturalness.

Goldberg simmers enigmatically as she tries to get on with her ironing while Jimmy needles her incessantly, and she’s quite touching in her vulnerability.

Also fine is Adam Driver, who played Frank Langella’s son so well in the Roundabout’s revival of Terrence Rattigan’s “Man and Boy.” Rattigan, of course, was one of the traditional playwrights, along with Noel Coward, that “Look Back in Anger” was supposed to finally rout.

Even if Jimmy is something of a self-portrait, Osborne surely couldn't have expected that our sympathies should lie entirely with him, as – especially today – his misogyny towards Alison and then Helena is hugely repellant and uncomfortable to watch. Dominant as Jimmy's character is, we're given plenty of opportunity to feel Helena's and particularly Alison's pain.

For all the sometimes off-putting harshness of Gold's staging, this revival is well worth your time.

(Laura Pels Theatre at the Harold and Miriam Steinberg Center for Theatre (111 West 46th Street, 212-719-1300 or www.roundabouttheatre.org; through April 8) Print this post
Posted by Harry Forbes at 7:53 PM