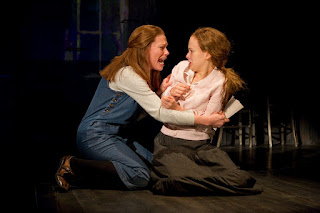 I’m pleased to report that this “newly reworked and fully re-imagined production” of the legendary Broadway disaster by MCC Theater does indeed play far better than the original.

Of course, there’s no doubt that Stephen King’s novel is rather peculiar source material for a musical, even with the best intentions of its creators. But, in the intervening years since 1988, we’ve seen so many other unlikely musical properties that "Carrie' now registers as little worse than "Grease" with a violent denouement.

Betty Buckley and Lintzi Hateley were terrific back in the day as the Bible-thumping mother and overly sheltered daughter, but Marin Mazzie and Molly Ranson are also quite outstanding. I like Mazzie’s warm, tones darker than Buckley’s and Barbara Cook's. (Many forget that Cook created the mother role in the musical’s first staging by England’s Royal Shakespeare Company, no less.)

The narrative plays out more conventionally than the often unwieldy original. Young Carrie is the butt of cruel bullying at her Chamberlain, Maine high school, particularly after she experiences her first period in the shower after gym class, and is patently clueless about what has happened to her. Chief among the tormentors who mock her after this incident is the bratty Chris (Jeanna De Waal) and her thuggish boyfriend Billy (Ben Thompson).

Chris’ best friend Sue (Christy Altomare) finds she has a conscience and takes pity on the pathetic girl, causing a rift with the unrepentant Chris. Gym teacher Miss Gardner (Carmen Cusack) tries to chastise the bullies, but these are uncommonly tough, foul-mouthed kids.

In any case, Sue persuades her aspiring writer/jock boyfriend Tommy (Derek Klena) to invite Carrie to the prom to make amends in some measure, but a vicious prank by Chris and Billy turns the prom into a scene of horror, with Carrie pulling out all the stops with her nascent telekinetic powers.

Director Stafford Arima’s production is much less stylized than the original staging on a stark white set, and the strengths of Michael Gore’s score register more strongly as a result. (Ditto, the quality of most of Dean Pitchford's lyrics.) There are some very pretty things here, beyond the occasional bombast – Tommy’s “Dreamer in Disguise,” Sue’s “Once You See,” Carrie and Miss Gardner’s “Unsuspecting Hearts,” the “Do Me a Favor” quartet, and above all, the powerful mother/daughter duets, all sounding splendid in Doug Besterman’s orchestrations, under Mary-Mitchell Campbell’s musical direction.

Mazzie is quite extraordinary. Her hair a dirty blonde mop, minimal makeup, she is a formidable, even frightening, presence until, that is, Carrie shows her mettle. Ranson makes Carrie a pitiable creature transforming beautifully – though, alas, only briefly -- in her “Cinderella” moments at the prom. All the supporting roles are well cast, too.

The audience watched in mostly rapt silence, and stood for a genuine ovation at the end. Only a few smart alecks – friends of a member of the creative team – snickered obnoxiously in the back rows, unmoved by even the most touching moments of the young heroine's sad saga.