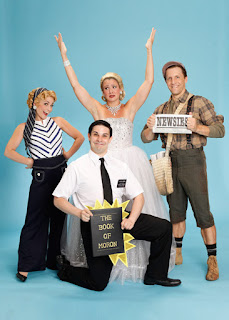 Like the mythical Scottish town of “Brigadoon” (cleverly evoked in the opening number here, “Big Lampoon”), “Forbidden Broadway” has reappeared for the first time since 2009, and the three year rest has reinvigorated the franchise, as this is surely one of sharpest editions ever.

Natalie Charlé Ellis, Scott Richard Foster, Jenny Lee Stern and Marcus Stevens comprise the ensemble, with David Caldwell on piano, and they are as versatile a bunch as ever played earlier editions.

Not quite all of creator Gerard Alessandrini's parodies are winners, but when he nails it – which is often – the results are quite brilliant. In that category, I’d include a past-it Bernadette Peters’ singing of her mentor’s adulation, “In Sondheim’s Ears,” the fawning interplay of Mandy Patinkin and Patti LuPone in their Broadway concert, the pretensions of “Once,” Audra McDonald’s scenery chewing in “The Gershwins’ Porgy & Bess” and director Diane Paulus’ brazen tampering with the original. There are dead-on send-ups of Catherine Zeta-Jones’ lah-di-dah foray into Sondheim, the crudeness of “Jersey Boys,” the Julie Taymor/Bono legal imbroglio of “Spider-Man” set to (what else?) “Sue Me” from “Guys and Dolls.” and Trey Parker and Matt Stone’s general lowering the tone of Broadway with their “Book of Mormon.”

Some of the Great White Way’s unfortunate current trend towards the vapid and cheesy are skewered in such numbers as Mary Poppins’ “Feed the ‘Burbs” and the “Rock of Ages”parody which likens such shows to NASCAR racing.

Less successful, as the barb isn’t remotely justified, is the Sutton Foster segment (“Everything Blows”). The implication seems to be that she coasted in her dance numbers in “Anything Goes” and didn’t sing pleasantly either. The Matthew Broderick parody is a partial success. The fat suit is funny, but the rest misses the mark, and the impersonation is not one of the better ones. The Ricky Martin/Elena Roger “Evita” send-up is a mixed bag, too. It’s not that Roger lacks star quality; that she has. What she lacks is the big voice audiences have come to expect in that part. And thus, that’s the part of the spoof that really lands.

But these are minor carps in a evening that moves briskly – thanks to Alessandrini and co-director Phillip George -- and scores delightfully high on the laugh meter.