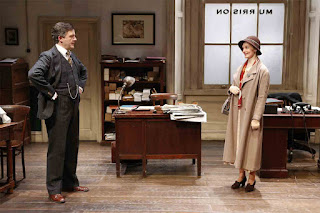 Kudos to London’s Finborough Theatre for resurrecting this 1935 rarity by J.B. Priestley as part of their “rediscoveries” season, and to 59E59 Theaters for having the further good sense to import it.

The title character is the middle-aged partner of an import form at the height of the Depression. The economy is bad, and salesmen come into the office each day trying to sell wares -- everything from stationery to shaving cream -- that no one really wants. Indeed the firm of Briggs and Murrison is in dire shape itself with creditors demanding payment with increasing ferocity. But the ever cheerful Cornelius is counting on the return of his long-absent partner Murrison (Jamie Newall) after a long journey to straighten things out.

Though the first act is largely comprised of lightweight banter, a darker element is introduced towards the act’s conclusion, and the second act, gripping from start to finish, shows Priestley in top form, with a couple of exquisite twists.

Today’s economic situation gives the play added resonance and relevance, underscored by Sam Yates’ direction which is faithful to the period, and deftly brings out all the inherent nuance.

Spiritual matters are frequent Priestley’s themes and Cornelius has a brief speech in the second act where he ruminates about the afterlife and our purpose on earth that would seem to be the true heart of the play.

As the titular character, Alan Cox makes a fascinating protagonist: resolutely upbeat through adversity, sardonically humorous, and just that little bit off center to make him as intriguing a character as Ralph Richardson must have done in the original. His yearning for something greater in life, exemplified by his dream of finding the lost city of the Incas in the Andes, is most touchingly portrayed.

The play is beautifully cast throughout with some very deft double-casting as only the English can do, Particularly impressive in that regard is Beverley Klein as the charlady who opens the play, and then as one of the firm’s creditors, an upper crust busybody.