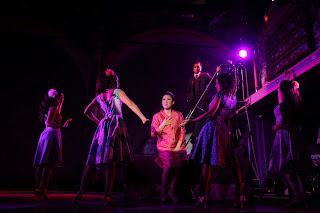 The specter of “Evita” will surely be top of mind to anyone watching this musical based, as it is, on the rise of Philippine First Lady Imelda Marcos. The work – already done in concert form and released as a concept album – was conceived by David Byrne, who also did the lyrics and collaborated on the music with Fatboy Slim.

The plot follows virtually the same trajectory as Tim Rice’s book for the earlier show about the notorious Argentine First Lady, following its heroine from beauty pageant queen to courtship, marriage with an up-and-coming politico (here Ferdinand Marcos), immense popularity, and abuse of her position under a glamorous veneer.

What makes “Here Lies Love” really special is the brilliance of the environmental staging of Alex Timbers (“Bloody Bloody Andrew Jackson”), and Annie-B Parson’s witty choreography. The audience stands throughout the 90-minute show, watching the action on multiple moving stages, around which they are gently guided by a discreet tech crew. The LuEsther Hall space is flanked by two traditional stages at either end, and three moving platforms that are moved throughout the evening to form different configurations.

With a pulsating dance beat (homage to Imelda’s love of discos) alternating with some very pretty ballads, there are photographic and video projections (Peter Nigrini), both archival and in-the-moment, as Imelda and Ferdinand come off the stage and move throughout the crowd: their public.

Generous use of stage fog and Justin Townsend’s beautiful pink and blue lighting predominates creating a truly immersive, but never off-putting, atmosphere. Clint Ramos’ costumes, too, are a continual source of pleasure.

The sound is on the loud side (earplugs might not be out of line for some), but M.L. Dogg and Cody Spencer’s work in that department is exemplary.