The Comedy of Errors (The Public Theater) 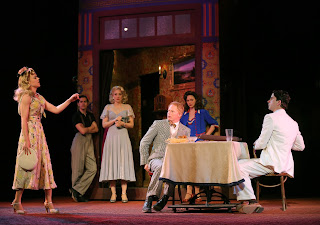 “The Comedy of Errors” may not be in the exalted category of Shakespeare’s later comedies, like “Twelfth Night” or “As You Like It,” but there’s no doubt that, in the right hands – even without the added delights of Rodgers and Hart (they adapted the comedy in their 1930s hit “Boys from Syracuse”) – it can be side-splittingly funny.

And, in the fast-moving, intermission-less production of Daniel Sullivan, it is most definitely in the right hands.

Set in 1940s upstate New York, a poster of Eddie Cantor’s “Roman Scandals” movie plastered on a wall as perhaps a sly nod to the play’s roots in Roman playwright Plautus (set by John Lee Beatty), the story of twin masters and servants separated as infants during a shipwreck updates very neatly indeed.

And though not a musical, there is, in fact, plenty of music of the Swing variety, along with some virtuoso jitterbugging (choreography by Mimi Lieber) during the scene changes.

Hamish Linklater and Jesse Tyler Ferguson double as both sets of twins, the masters Antipholus and servants Dromio, a concept which works brilliantly in their expert performances. The ending – when all the confusion is finally sorted out, and all four characters are traditionally onstage together – is accomplished satisfactorily in a way I won’t spoil.

As Antipholus of Ephesus’ thoroughly confused wife Adriana, Emily Bergl is very funny indeed, and she’s evenly matched by Heidi Schreck as her sister Luciana who mistakenly believes she’s falling in love with her sister’s husband.

Others in the standout cast include De’Adre Aziza as the Courtesan who thinks she’s been deceived by Antipholus and sings a deliciously torchy “Sigh No More” (to music by Greg Pliska); Becky Ann Baker as the Abbess who figures prominently in the play’s denouement, Jonathan Hadary as the piteous father of Antiphlous; and Skipp Sudduth as a Godfather-like Duke.