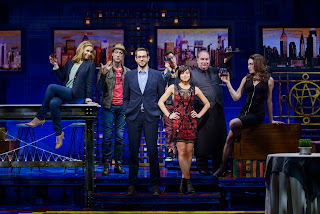 On the unpromising premise of a blind date unfolding in real time, with all of the action confined to the restaurant where a mismatched couple meet, emerges a most delightful show, and a definite crowd-pleaser.

With a sharp, funny book by Austin Winsberg, amusing songs by Alan Zachary and Michael Weiner, and thoroughly engaging performances by leads Zachary Levi and Krysta Rodriguez, the pace never flags for its 95 intermission-less minutes. Though it sounds like one big cliché, Winsburg and the team have found fresh twists and the show plays like a good Neil Simon comedy with songs.

Rodriguez is Casey, no stranger to blind dates, and with an unfortunate penchant for bad boys. Levi is Aaron, new to the whole routine, and still smarting over his breakup with Allison. They’ve been brought together by Casey’s sister’s husband who had a hunch they might click.

Needless to say, things don’t go well, with Aaron putting his foot in his mouth at every opportunity, and Casey giving off an off-putting, abrasive vibe.

Allison, the bar’s waiter and various other characters, past and present, are played by a talented ensemble of five actors (Bryce Ryness, Kristoffer Cusick, Blake Hammond, Sara Chase, and Kate Loprest) who provide running commentary (and advice) in the minds of the protagonists.

Hammond’s hammy waiter, one with songwriting aspirations, is a standout, and Cusick generates laughs for his manic portrayal of Casey’s gay pal constantly calling her with “bailout” messages, in case she should need them, though the humor palls after a while.

Bill Berry directs smartly, bringing out the humor and sentiment of the material.

The show was originally done last year at The 5th Avenue Theatre in Seattle (co-produced by A Contemporary Theatre) where it garnered good reviews and awards.

This is one of those intimate shows that could just have easily been mounted Off-Broadway, but with David Gallo’s snazzy set and projections, it looks just fine on the Longacre stage. I predict a popular afterlife in regional theater and schools.