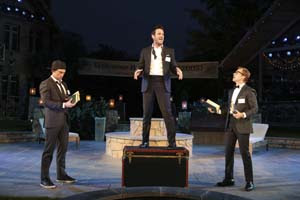 The Public has a winner in this full-out musical version of Shakespeare’s wordy early comedy, which jettisons much of the arcane text, but remains utterly true to the essence of the piece.

Alex Timbers, who adapted the book and directed, and Michael Friedman, who composed the songs, have reunited after their “Bloody Bloody Andrew Jackson” success, but what they have fashioned here is more in the vein of a traditional Broadway musical, one very much in the style of the John Guare-Galt MacDermot “Two Gentlemen of Verona,” which, we’re told, served as a template for this one.

And like “Two Gentlemen,” the score covers myriad genres – from rock to doo wop to Broadway -- which bubble most delightfully throughout the intermission-less 100 minutes.

Reset in a New England town (a beautiful eye-filling set by John Lee Beatty, and spot-on costumes by Jennifer Moeller), the King of Navarre and his three comrades – who have sworn off women for academic pursuits -- have returned for a five-year college reunion, and the Princess of France and her entourage are young women with whom they had perhaps dallied years before.

The cast is wonderful across the board, excelling in their Shakespearean line readings as much as their musical turns. Daniel Breaker’s Navarre and Colin O’Donnell’s Berowne are outstanding, with top-notch work from Lucas Near-Verbrugghe as Dumain and Bryce Pinkham as Longaville.

The women have less stage time, but Patti Murin as the Princess, Maria Thayer as Rosaline, Audrey Lynn Weston as Katherine, and Kimiko Glenn as Maria all have their opportunities to shine. The part of wench Jaquenetta has been built up and Rebecca Naomi Jones fills it beautifully, stopping the show with her “Love’s a Gun.” Rachel Dratch is very funny as a gender-bending Holofernes, and Jeff Hiller her equally pretentious sidekick Nathaniel.

The handsome production – for all its high spirits and intentional goofiness – ends on an appropriately melancholy tone, as it should.

It would be a shame if the show vanished after another week. Perhaps a Broadway transfer is in the offing, even if Shakespeare can be a dicey commercial proposition. But I suspect this might have wider appeal than the teams “Bloody Bloody Andrew Jackson.” In any case, here’s hoping the score at least gets recorded.