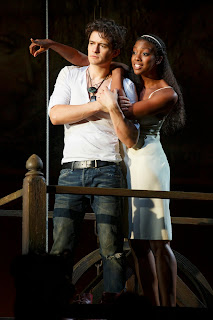 He has been cast opposite the lovely Condola Rashad who has gone from strength to strength in her prior stage appearances, but alas, on this occasion, falls short both in her interpretation and her command of the text. Audibility is sometimes a problem, too, as words are lost as she rushes the dialogue in conveying Juliet’s youthful ardor.

And so it goes with the rest of the cast in David Leveaux’s often gimmicky production which is never revelatory, and the conceit of having black actors as the Capulets and white ones as their bitter rivals, the Montagues, adds little of substance.

On the plus side, we have Jayne Houdyshell’s accomplished Nurse, Brent Carver’s uncliched take on Friar Lawrence, and Christian Camargo’s verbally dexterous Mercutio. But Chuck Cooper and Roslyn Ruff’s Lord and Lady Capulet are fairly one note caricatures.

The production (designed by Jesse Poleschuck with costumes by Fabio Toblini) is more or less modern dress with Italianate touches but the period is, on the whole, non-specific. Romeo arrives on a motorcycle, and some of the gang fighting is not unlike the skirmishes in “West Side Story.”

I much preferred Michael Grief’s superb Central Park staging in 2007, with Oscar Isaac and Lauren Ambrose in masterful form, with a uniformly excellent supporting cast, while this Cliff Notes version – as someone aptly categorized it after the show, referring to the cut text – feels rushed, perfunctory, and a bit dull, despite such flourishes as Poleschuck’s rows of flame which rise and fall at key moments.