A Time to Kill (Golden Theatre) 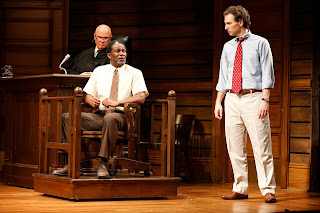 The story of an ambitious and not completely altruistic lawyer Jake Brigance (Sebastian Arcelus), who defends a black man Carl Lee Hailey (John Douglas Thompson) who has shot two white men who savagely raped his 10-year-old daughter, against an opportunistic district attorney Rufus Buckley (Patrick Page) with gubernatorial aspirations, holds your interest through its two acts, thanks to good performances and Ethan McSweeny’s resourceful direction.

Though most of the action takes place in the Mississippi courtroom, James Noone’s turntable set allows for a variety of perspectives and a couple of other locales (including Jake’s office and the outer office of the courtroom).

Was Carl Lee’s action justifiable homicide in a town where the culprits were sure to get an easy sentence? Is vigilantism ever permissible? Is there ever, as the Bible says, “a time to kill”? Are the lawyers more interested in career advancement and publicity than the cause they are defending? The answers are left to the audience. And indeed the judge and attorneys present their arguments across the footlights. That conceit first seems contrived, but ultimately works.

The show is well cast across the board. Arcelus (looking not unlike McConaughey) and Page make plausible adversaries, with Page particularly relishing the corrupt politician part. Though Arcelus has a dramatic role in TV’s “House of Cards” series, his past Broadway roles have all been musicals (e.g. “Elf,” “Jersey Boys”), but he demonstrates here he can move with ease between the genres. He's effective and sympathetic in the part.

The great classical actor Thompson plays Carl Lee with power and pathos. Tonya Pinkins shines in her brief scenes as Carl Lee’s uncomprehending but supportive wife. With his real-life political background, Fred Dalton Thompson comes across as a fully convincing judge. And Ashley Williams is appealing as a law school graduate jockeying to be Jake’s law clerk.

Lee Sellars and Dashiell Eaves are the scurvy villains, but reappear later in the play with some neat doubling.

Tom Skerritt proves a particular audience favorite as an alcoholic lawyer who has seen better days, and had not been, any more than Jake or Buckley, exactly a paragon of moral rectitude either.

Some familiar with the book and the movie may not find the story worth revisiting, however competently done, but the audience at my performance was completely absorbed, as was I, and I’d count Grisham’s Broadway debut (for this is the first of his works to be so adapted) a promising one.