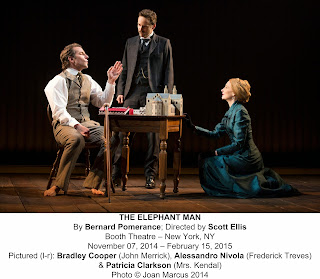 In the revival of Bernard Pomerance’s 1977 play, Cooper is backed by a strong supporting cast, including Alessandro Nivola as Frederick Treves, the compassionate surgeon who gives Merrick shelter after a lifetime of abuse in a sideshow, and ultimately protection in the London Hospital, and Patricia Clarkson in Carole Shelley’s original role of the actress Mrs. Kendal to whom Treves turns in order to give Merrick the experience of normal companionship.

I did feel that Clarkson, always so marvelous, is somewhat disappointing here. She projects a rather generalized empathy, but for the grand actress she’s supposed to be, rather lacks both the requisite theatricality, and even more surprisingly, the English accent. What’s there is rather half-hearted.

Still, Scott Ellis’ production, which started out in Williamstown in 2012, is stylishly staged, and nearly always engrossing, except perhaps in some of Treves’ long-winded ruminations.

Anthony Heald is impressive in the dual role of Merrick’s manipulative freakshow manager Ross, and later as Bishop How, one of the many pillars of society who come to pay homage to Merrick when he’s all cleaned up in the hospital, each imbuing Merrick with the characteristics he chooses to see, and each believing he’s particularly attuned to his innermost thoughts, all the while showering him with lavish – if not always appropriate -- gifts.

The rest of the supporting cast, including Henry Stram as the head of the hospital and Kathryn Meisle in various roles, is solid.

But it is Cooper’s performance that makes this revival a must-see. Like his predecessors in the role, he eschews makeup or prosthetics but contorts his face and body to the extent that good looking as Cooper plainly is, we can believe he’s the grotesque figure we’ve just seen in the historic photographs. And beyond his physical prowess at transforming himself so impressively, he gives a moving and heartbreaking performance.