It’s Only a Play (Schoenfeld Theatre) 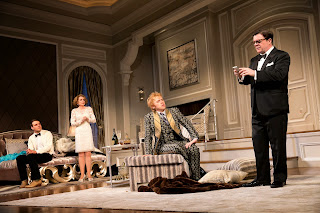 Yes, “It’s Only a Play” is really is as funny as you’ve heard. It’s pure farce in the best sense of the genre, and one sprinkled with wickedly cutting remarks about almost everyone and everything in the current Broadway drinking water.

Terrence McNally has substantially revised his late early 1980s play (which, in an earlier incarnation, was actually first done in the 1970s) with smack up-to-date references to “Wicked,” “Lady Gaga,” “Matilda,” and more, and the result is catnip for lovers of theater, gossip, and an all-around good time.

The characters are an amusingly stereotyped lot. There’s Matthew Broderick’s a second-rate playwright Peter Austin who just keeps cranking them out anyway. Nathan Lane is his sardonic best friend James Wicker, once a New York stage actor, and now stagnating in semi-obscurity in a long-running TV series. Stockard Channing is Virginia Noyes, a boozy, drug-addled movie star saddled with an ankle bracelet, returning to the stage in desperation. Megan Mullally is the wealthy but ditzy novice producer Julia Budder. It’s opening night of Austin’s play, and the action all takes place in Julia’s upstairs bedroom as party guests arrive below.)

Rupert Grint is the self-loathing and phobic British director who’s never gotten a bad review, but paradoxically longs for one. (Oh yes, and he’s also an inveterate kleptomaniac.) And F. Murray Abraham’s the sour critic who secretly longs to be part of the theater himself. Newcomer Micah Stock is the unflappable would-be actor Gus P. Head handling the coat checking.

What unites all of them, despite their individual foibles and idiosyncrasies, is their devotion to theater.

The first act builds to the eagerly anticipated New York Times review. The protracted and agonizing reading of Ben Brantley’s review which opens the second act is the dramatic highpoint, but there’s also a prayer scene that vies for the evening’s drollest set piece.

I had heard the second act was less good than the first, and that McNally was relying too heavily on all the name dropping. But I found the second act every bit as riotously comic, and that the references to famous people and shows creates a delirious snowball effect, as name follows name: Liza, Barbra, “The Lion King,” “Wicked,” “Matilda,” and so on.

The lines are so funny it’s tempting to quote them all, but that would spoil the fun.

I don’t think Lane has ever been funnier, and that’s saying a good deal. It’s nice to see him reunited with his sidekick from “The Producers,” Broderick, still boyishly appealing despite disconcertingly graying hair. Relative novice to the stage Grint (Ron Weasley in the Harry Potter films) gives a sharp portrayal of the jaded director. Channing earns one of the biggest hands of the evening for her broken down but resilient diva. Abraham proves as adept at comedy as the more heavy roles with which he’s associated. And Mullally is most endearingly flustered. Lastly, it must be said that Stock holds his own exceedingly well with all the veterans.

Scott Pask’s spacious bedroom set provides a luxurious backdrop for all the over-the-top angst. Ann Roth’s costumes, including the endless procession of guest coats – ranging wittily from Tommy Tune’s to Lady Gaga’s – are a show in themselves. Philip Rosenberg’s lighting and Fitz Patton’s sound are top of the line.

The impeccable production is under the direction of Jack O’Brien whose razor sharp comic sense elicits spot-on readings from his cast.

For all the cattiness of the dialogue – particularly the lines spoken by Wicker (Lane) who gets to deliver most of the zingers – the show is really one big valentine to the theater.