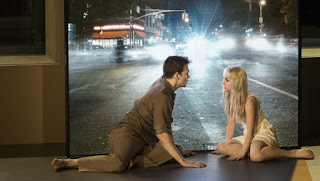 “Inspired” by the Walter Tevis novel “The Man Who Fell to Earth” -- which also served as the basis for the Nicolas Roeg film of that name starring David Bowie -- “Lazarus” is, in fact, a sequel.

Still, if you choose to see it, and provided you can score a ticket to the limited, sold-out run, it would not be a bad idea to bone up on the novel’s synopsis on Wikipedia which will, at least, give you some idea of the general setup. Otherwise, you might think that central character Newton is simply a burnt out executive choosing to live a reclusive lifestyle in a New York apartment as he subsists on gin and Twinkies, and not an actual alien who wishes to return to his home planet.

Adapted by Bowie and playwright Enda Walsh, and directed by the Belgian Ivo van Hove, already represented on Broadway with the overly stylized “A View from the Bridge” which is about to be joined by another Arthur Miller play, “The Crucible,” later this winter, “Lazarus” is an avant garde production with a frankly difficult to follow narrative. One moment there are geishas on stage, the next, people are popping black balloons. Go figure.

In any case, the whole has been fitted out with songs from Bowie’s catalog (“Changes,” “This Is Not America,” All the Young Dudes,” etc.), and they are, it must be said, very well performed by Michael C. Hall as the alien Newton, and the rest of the first-class cast. (The seven musicians comprising the band are lined up behind the windows of Newton’s apartment, and are occasionally concealed by curtains),

Those who know Hall only from his outstanding TV work (“Dexter,” “Six Feet Under”) may be surprised to hear what a fine singer he is, too, and he certainly delivers the goods with powerful vocals and a committed dramatic performance.

The rest of the ensemble cast is also exemplary including Michael Esper as a Mark David Chapman-like character named Valentine, Cristin Milioti as Newton’s besotted assistant Elly (who dyes her hair blue to emulate Newton’s lost love Mary Lou), Bobby Moreno as her increasingly jealous boyfriend Zach, Sophia Anne Caruso as a ghostly child; and the rest including Nicholas Christopher, Lynn Craig, and Charlie Pollock. Caruso does a powerfully understated rendition of Bowie’s “Life on Mars?”