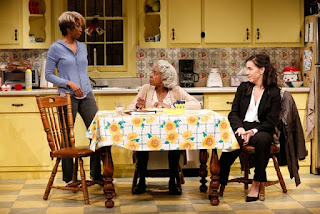 Here’s a lively family comedy/drama about a West Philadelphia black family. As the feisty titular matriarch, winningly played by Marjorie Johnson, starts to show ever increasing signs of Alzheimer’s, her three adult children – gathering on Christmas Eve -- struggle to cope.

There’s eldest daughter Shelly (Sharon Washington), a lawyer who’s a bundle of panic as she raises the alarm about Dotty’s worsening condition. Gay son Donnie (Stephen Conrad Moore), a music blogger, whose relationship with his white husband Adam (Colin Hanlon), is seriously strained and exacerbated after enduring the rigors of a juice cleanse, finds it hard to balance his own domestic travails with the revelations about his beloved mom. And younger sister Averie (Libya V. Pugh), an aspiring singer and brief YouTube sensation, comes in like a dynamo at the end of the first act to further stir the pot.

Dour longtime neighbor Jackie (Finnerty Steeves), once Donnie’s childhood sweetheart (who’s never recovered from learning he was gay), and now living in New York pregnant with the child of a married man, is back to witness the family’s rising hysteria, while the family’s caregiver Fidel (Michael Rosen) from Kazakhstan offers Dot unwavering and calm support.

Johnson convincing limns the stages of the disease, one moment cheerfully bright and lucid, the next, utterly forgetful. One moment sweet, one moment ferocious.

Despite its potentially downbeat theme, the play is mostly enjoyable and comic even bordering on sitcom territory, though it grows more bittersweet in the second act. And though it starts to feel overlong, it is nearly always absorbing.

Allen Moyer has designed a pair of lovely sets: the family’s bright yellow kitchen for the first act, and then a beautifully appointed living room with a giant Christmas tree in the second. Kara Harmon’s costumes are likewise bright and sunny. And Tom Morse’s sound design – its evergreen Christmas tunes (from Tony Bennett onwards) giving way to the cacophony of sounds we are made the realize Dotty is experiencing in her head.

That latter comes to light in a so-called “Virtual Dementia Tour” proposed by Dotty and Fidel as a game in the second act, with the ulterior motive of showing the family how the disease truly feels from the inside. That sequence is instructive, to be sure, if a bit obvious in its methods.

The performances are uniformly fine. Domingo writes well with natural sounding dialogue, only sometimes perhaps going too far with the family’s over-the-top reactions to their mother’s condition.

Susan Stroman directs with the same sure hand she applies to her more customary big musicals, as she deftly and sensitively balances the comic and sudden sharply dramatic moments. And though this is a non-musical, she has choreographed a most touching ballroom sequence for Dot and Adam, whom the confused matriarch momentarily takes to be her late husband.