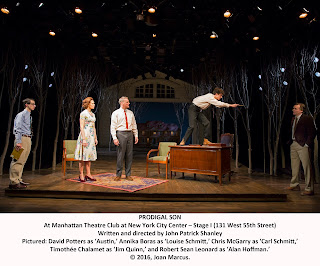 This quietly affecting autobiographical drama about John Patrick Shanley’s prep school experience in the late 1960s is, I think, one of the playwright's very best.

Transplanted from the rough streets of the Bronx to the elite New Hampshire Catholic school, young John – here called Jim Quinn (Timothée Chalamet) tries the patience of the school’s headmaster Carl Schmitt (Chris McGarry) and the other students (though we only hear about them), including his roommate Austin (David Potters).

But an empathetic teacher (Robert Sean Leonard) and the headmaster’s soft-spoken wife (Annika Boras) become the boy’s champions even as John/Jim continues to be his own worst enemy, alienating nearly everyone around him.

Performances here are excellent. Chalamet makes a perfect anti-hero, belligerent and ever provocative but likably vulnerable despite everything. (Of course, Shanley has written it that way.)

McGarry skillfully conveys the frustration of a man who’s taken a chance on someone against his better judgment trying to hold steady despite Jim’s often confrontational behavior, while Boras is wonderfully sympathetic as his gentle wife, clearly wounded by a past occurrence, the poignant facts of which are not revealed till late in the play. And Leonard is solid as Jim’s unswerving champion, a particularly tricky role as it turns out.

The intermission-less play is leisurely paced but builds in tension as it goes along with Jim’s graduation perilously in doubt.

A long, quiet dinner scene between the headmaster and his wife – as they discuss the theft and mysterious reappearance of some LPs -- is especially nuanced, and delicately played and written. I would even single it out as the finest sequence of the evening. And a climactic face-off between young Jim at his most pugnacious and Schmitt, pushed to the limits of his tolerance, generates plenty of sparks.

Shanley has directed the play himself, so one presumes authenticity. As it happens, my cousin’s relations are among those portrayed in the play, and has marveled at the great accuracy of the characterizations.

“Prodigal Son” is the sort of play that stays with you.