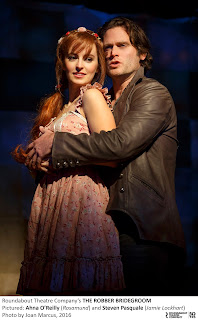 I don’t remember too much of the original 1975 production (and I did see the Patti LuPone/Kevin Kline incarnation at the now razed Harkness Theatre, rather than the later Barry Bostwick Broadway transfer). I do recall generally liking it, but the property was never one that I particularly longed to see again. And perhaps others felt the same way, as Roundabout’s enjoyable and quite imaginative revival is, in fact, the first major one in New York since the original finished its run.

Based on a Eudora Welty short story (which, in turn, had its roots in Grimm), with a bluegrass-flavored score by Robert Waldman and book and lyrics by Alfred Uhry (“Driving Miss Daisy”), it tells the story of an 18th century Mississippi bandit Jamie Lockhart (with a decent side when he’s not in bandit mode) who falls for Rosamund (Ahna O’Reilly), daughter of a wealthy planter (Lance Roberts) deep in the woods with Lockhart in disguise.

After he saves the planter’s life, the latter brings him home as a potential bridegroom for Rosamund, she disguises herself so she can keep herself for the man she’s met in the woods, not realizing he’s one and the same. Complications ensue, especially when Rosumund’s lusty step-mother Salome (Leslie Kritzer) begins to hanker for the handsome stranger herself.

As the show wends its way through its 90 intermission-less minutes, farcical events lead to further confusion, complicated by Salome’s machinations and the interference of an ornery pair of thieves named Little Harp (Andrew Durand) and his brother Big Harp (Evan Harrington), the latter a disembodied head kept in a box. (Yes, it’s that kind of story.)

The story has its share of dark moments -- as fairy tales often do -- but the overall tone is light and humorous.

Kritzer really outdoes herself with an over-the-top comic performance, channeling Carol Burnett at her most uninhibited, and O’Reilly is quite lovely as the love-struck Rosamund but not without plenty of gumption. And, as expected, Stephen Pasquale here adds another solid portrayal to his roster of musical leading men, singing with gleaming tone, and performing with requisite dash and swagger.

Alex Timbers directs with the resourceful style he brought to “Peter and the Starcatcher” and “Bloody Bloody Andrew Jackson,” abetted by lively musical direction by Justin Levine and foot stomping choreography by Connor Gallagher.

Much of Timber’s staging is very funny indeed, so much so that Pasquale broke up a couple of times at the antics around him, particularly a protracted bit of bawdy business involving Kritzer.

Other roles are well taken by Greg Hildreth as Goat, Nadia Quinn as a Raven and Goat’s Mother, and Devere Rogers as Airie.