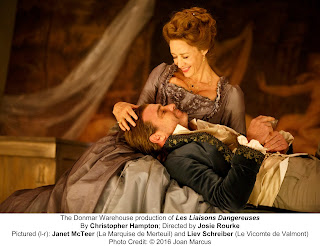 Here’s a highly absorbing revival of Christopher Hampton’s adaptation of Choderlos de Laclos’s juicy epistolary novel involving the seduction of an innocent convent bred girl (Elena Kampouris) at the urging of the amoral Marquise de Merteuil (Janet McTeer) who wants to ruin her for the intended husband, who once betrayed the Marquise.

Her partner in this enterprise is her sometime lover, the lascivious Vicomte de Valmont (Liev Schreiber), who currently has set his sights on a virtuous wife Madame de Tourvel (Birgit Hjort Sorensen).

The production -- an import from London’s Donmar Warehouse (where Dominic West played Valmont) -- is highly atmospheric, thanks to Mark Henderson’s muted lighting, and Tom Scutt’s museum worthy sets and costumes. There is a striking and effective use of chandeliers which rise and fall throughout the evening. Michael Bruce has provided some fine period sounding choral passages for the scene changes.

All in all, this revival far outclasses the Roundabout’s rather pedestrian production of eight years ago with Ben Daniels and Laura Linney.

McTeer -- so funny and apt as a very butch Petruchio in The Public’s “The Taming of the Shrew” last summer -- is all elegant and conniving imperiousness here, and Schreiber affects a fine English accent (at times, in fact, sounding uncannily like Richard Burton) and plays the vile seducer with delicious nonchalance.

Sorenson’s understated dignity and bearing make the challenge of her seduction all the more convincing, and Kampouris is amusing as the inhibited virgin who gets her first taste of sex, and likes it.

Apart from eliciting such spot-on performances for her actors, Josie Rourke’s direction offers a clever and interestingly feminist take on the story making it fresh even for those who fondly remember the original RSC production with Alan Rickman and LIndsey Duncan, or the Glenn Close and John Malkovich film.

The play holds up very well indeed, and proves one of the best stage adaptations of a literary classic.