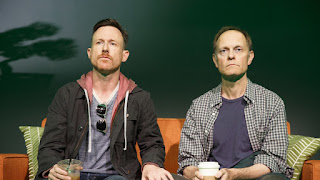 David Hyde Pierce gives another masterful performance in Adam Block’s initially amusing but then seriously sobering play about a lonely gay man in a New York apartment ruminating about his life and his place in the universe and the subsequent event that would seem to bring clarity to those questions.

The play begins with a doozy of a monologue in which the Pierce character, Nate, an ad agency proofreader, discourses on all the ways he’s searched for meaning and direction, including therapy and, most especially, astrology; Pierce’s delivery as he addresses the audience is so natural that you almost fear someone might answer back.  (At my performance, at any rate, no one did.) Later, we see him meet up with his friend Curtis (an excellent Brad Heberlee) on a park bench and the self-examination, including his fear of intimacy, continues.

Marinda Anderson, Nedra McClyde and Lynne McCollough take on multiple roles as the play progresses, and all are most accomplished. Anderson and McClyde’s dialogue involving an encounter with a “meter maid guy” is highly entertaining, even though, by then, the play has veered onto a profoundly serious course.

The play, you see, has a twist which dramatically alters the mood of the piece, though it would be a spoiler to discuss just what that is here. Still, director Anne Kauffman handles the transition with assurance. Bock has written quite a daring-in-its-length silent scene which Kauffman sustains thanks, in large part, to Mikhail Fiksel’s superb sound design; the city sounds outside Nate’s apartment are strikingly realistic and further underscore the play’s theme masterfully.

But be forewarned that for all its considerable merits, “A Life” is ultimately unsettling and downright disturbing, so not to every taste.