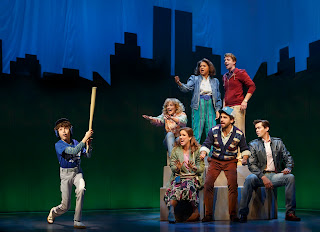 There’s no question this is a finely mounted revival of William Finn’s 1992 conflation of his two Off-Broadway musicals which started life at Playwrights Horizon: “March of the Falsettos” in 1981 and “Falsettoland” in 1990.

I must say that the definitive original cast including Michael Rupert, Stephen Bogardus, and Chip Zien will be hard to put out of mind for those who remember. But then was then, and now is now, and certainly James Lapine, who directed the original and co-authored the book with Finn, has assembled the very best of Broadway’s current crop of talent on this occasion.

The action begins in 1979. Christian Borle is neurotic Marvin, who leaves his wife Trina (Stephanie J. Block in superb form) and 12-year-old son Jason (Anthony Rosenthal) for male lover Whizzer (Andrew Rannells). Trina and Jason seek counsel from Marvin’s shrink Mendel (an excellent Brandon Uranowitz) who falls in love with Trina. In the second act, two years later, Marvin reconnects with Whizzer from whom he had separated in the first, and we meet his supportive neighbors, a lesbian couple Dr. Charlotte (Tracie Thoms) and her caterer partner Cordelia (Betsy Wolfe). But the specter of AIDS brings sadness.

Scenic designer David Rockwell use of modular blocks which cleverly serve various versatile functions, effectively lighted by Jeff Croiter, albeit against a rather ho-hum New York skyline drop, suits the brilliant quirkiness of Finn’s still wonderful score. “Four Jews in a Room Bitching,” “The Baseball Game,” and “I’m Breaking Down” -- the last, incidentally, quite a tour de force for Block -- still amuse in the surprisingly off-kilter way they always have, and the more serious numbers like “The Games I Play,” “”What More Can I Say?” and “What Would I Do?” still pack an emotional wallop.

The two halves hang together much more cohesively than they even did in 1992 when first joined. (I gather Finn has made further edits.)

The passage of time -- and the receding of the AIDS crisis -- has not, on the whole, dimmed the emotional effectiveness of the piece as much as one might imagine. But whether because of that, the particular personas of the principals, or simply my over-familiarity with the property, I did feel perhaps a few degrees less moved than remembered.

But AIDS notwithstanding, “Falsettos,” as Lapine asserts in a related program article, is “a story about family and about relationships,” as much as it is a gay story pe se. It’s also about men and maturity, as Trina bemoans the lack of such in the men in her life, played out against the parallel story of Jason’s impending bar mitzvah. And those themes indeed play every bit as well as before.

Borle, such a deft comic performer, takes on a more serious part here, and does it very well indeed. Rannells exudes charm, though he seems a more boyish  Whizzer than Bogardus. Young Rosenthal gives a remarkably uncloying performance. And Thoms and Wolfe are warm and appealing.

I was happy to read he show will be recorded -- for the first time complete as a unit -- by Ghostlight Records, and should sound wonderful. Besides the undeniable vocal excellence of the cast, Michael Starobin’s orchestrations sound particularly fine in the hands of music director Vadim Feichtner.