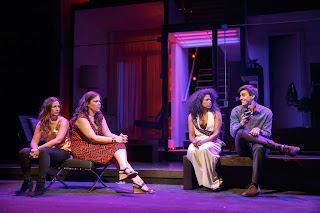 I recall very much enjoying Joshua Harmon’s play when it was done at the Roundabout’s Off-Broadway Laura Pels Theatre two years ago, but wondered how it would fare in a Broadway house. Well, if anything, the play seems richer and even more enjoyable in its bigger venue, and the original cast, reassembled (with one exception) here, even sharper in their characterizations.

“Significant Other” is the funny-sad tale of a self-pitying 29-year-old gay man, Jordan Berman (riotously played by Gideon Glick), forever searching for love, but taking comfort from his three gal pals: outrageous Kiki (Sas Goldberg), sympathetic Knopf editor Vanessa (Rebecca Naomi Jones, the newcomer to the play), and closest friend and former roommate, Laura (Lindsay Mendez). His unspoken crush on office mate Will (John Behlmann) propels the action of the first act, including a priceless scene where Jordan tortures himself over whether to press “send” on a forthright email to Will.

Jordan and Will do manage a date of sorts -- an outing to see a documentary about the Franco-Prussian War, of all things -- but Will’s interest in him proves inconclusive, though the film unexpectedly gives Jordan something more to ponder about his own mortality.

As, one by one, the girls meet guys of their own, inevitably leading to marriage, Jordan feels an ever sharper sense of loneliness and abandonment. He finds some comfort in his visits to his sweet grandmother (an endearing Barbara Barrie), but her occasional ruminations on suicide underscore his own forebodings of death and a sense that he may be doomed never to find someone to love.

Harmon writes with an uncanny ear for today’s lingo. Kiki’s outrageously self-absorbed opening speech is a small gem but there are many such throughout the evening. Sometimes it seems that the play is about to become as glib and superficial as Kiki herself, but Harmon balances the brittle humor with a deep poignancy most effectively. The scene where Jordan berates Laura for opting for a conventional wedding and marriage is especially powerful and painful to witness.

Trip Cullman elicits marvelous performances from all, including Behlmann and Luke Smith (who play all the other male roles), and his staging perfectly captures the rhythms of Harmon’s text. It must be said that Goldberg, Jones, and Mendez are especially fine, and completely inhabit their roles. The great Barrie’s scenes are short but potent.