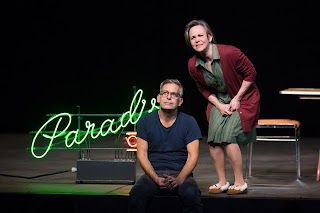 
There’s no denying that the abstract revival of Tennessee Williams breakout hit of 1945 is an oddball one. Director Sam Gold (“Fun Home,” “The Real Thing”) seems hell bent on upending most everything that smacks of the traditional.

Apart from the minimalist design (by Andrew Lieberman), his most radical concept is transforming Laura’s “barely suggested disability” into a seriously handicapped character in a wheelchair which she effortfully climbs into and out of several times throughout the evening. The production’s Laura, Madison Ferris, does, in fact, have muscular dystrophy.

The inclusive casting is admirable, but I don’t much care for her performance with its far too contemporary line readings, though it certainly fits Gold’s concept of stripping away any and all period trappings.

Paradoxically, for all its questionable innovations, this production moved me more than the last Broadway revival (with a solid Cherry Jones and a superb Zachary Quinto), and Judith Ivey’s Roundabout revival before that. Previous, fondly remembered productions of my experience -- with such Amandas as Jessica Lange, Julie Harris, and Maureen Stapleton -- played out along more traditional lines, and were none the worse for it..

John Tiffany’s version (for Cherry Jones) was not without its avant-garde touches pools of water on stage, and Laura emerging at one point from the sofa.

But any production of “The Glass Menagerie” revolves around its Amanda, and Sally Field -- last on Broadway in Edward Albee’s “The Goat” in 2002 -- proves again a potent stage actress and a creditable Amanda. (She had, in fact, previously earned praise for doing the part at the Kennedy Center in 2004.)

Fields employs only the trace of a Southern accent, but she primps and flutters with the best of them, and flies into tremendous rages when her plans are frustrated.

Actor/director Joe Mantello -- an intentionally more mature Tom than usual (a stunt that works) -- delivers his lines with intelligence and wry humor. As the Gentleman Caller, Finn Wittrock is not the usual courtly gallant, but a free spirited, boyishly energetic young man. His big scene with this very 2017 Laura thus has a radically different tone, though is played rather annoyingly in the dark, except for the natural light of a candelabra.

I mentioned pools of water in a previous production. But the rain that accompanies the dinner scene here is a veritable deluge. I suppose we must be grateful this is not an Ivo van Hove production or it might be raining blood.

For all its oddities, and its perverse variances from Williams’ stage directions, this yet manages to be a potent “Menagerie,” and I found myself willingly joining the enthusiastic ovation at the end.

Joe Mantello and Sally Field in The Glass Menagerie (Photo by Julieta Cervantes) Print this post
Posted by Harry Forbes at 2:47 PM