Joan of Arc: Into the Fire (The Public Theater) 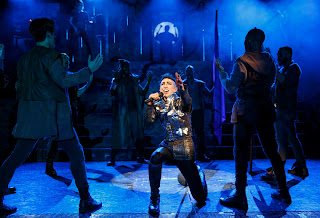 
Composer/book writer David Byrne and director Alex Timbers have come up with another striking pop musical as a follow-up to the “Evita”-like Imelda Marcos bio, “Here Lies Love,” at the Public in 2013. The new one traces the key events in the life of the 15th century martyred warrior saint, dramatized so vividly by Shaw and Anouilh (and numerous others)..

Unlike the immersive experience of “Here Lies Love” -- where audience members stood through the show and moved around the performance space, “Joan of Arc” plays out on a traditional proscenium.

Jo Lampert is the androgynous rock star Joan and her singing (and stamina) are wondrous. The plot follows the broad strokes of the familiar narrative including her convincing the French army to allow her to lead them in routing the English forces from France, successfully crowning the Dauphin, and her subsequent trial during which -- as in Shaw’s play -- she is persuaded to deny her miraculous voices until she realizes that she faces life in prison. She recants, with the unfortunate results that everyone knows so well.

An epilogue has Joan’s mother -- 25 years later -- appealing for her daughter’s reclamation. This is done, quite movingly, in “Send Her to Heaven” by actress Mare Winningham, revealing a sweet singing voice. The ensemble cast is fine with notable work by Sean Allan Krill as Joan’s chief inquisitor Bishop Cauchon, Kyle Selig as the Dauphin, and Michael James Shaw as the garrison commander Captain Baudricourt whom Joan persuades to lead the French troops to victory.

The action plays out on Christopher Barreca’’s ingenious set, complimented by Justin Townsend’s vivid lighting. Clint Ramos’ costumes range from the present day (in the opening and closing sequences), with contemporary allusions in the text, and the period.

Byrne’s score, under the musical direction of Kris Kakul, is accessible and often beguiling, albeit not without some repetition. A catchy calypso number, “Body Parts,” sung by the priests at her inquisition was the audience favorite.
(The Public Theater, 425 Lafayette Street; 212-967-7555 or www.publictheater.org; through April 30)

Jo Lampert and the company of Joan of Arc: Into the Fire. Photo credit: Joan Marcus. Print this post
Posted by Harry Forbes at 1:17 PM