Once On This Island (Circle in the Square) 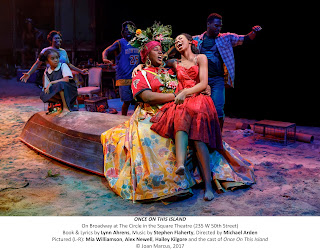 
The show originally launched the career of LaChanze back in the day, enjoyed a respectable multiple Tony-nominated run on Broadway after starting out at Playwrights Horizon, and won the Best Musical Olivier Award when it premiered in London a couple of years later.


This “Romeo and Juliet” themed fable -- based on Rosa Guy’s novel, “My Love, My Love” --  concerning native girl Ti Moune and the high-born lad Daniel whom she nurses back to health when his car crashes near her village is beautifully told. Ti Moune, ravishingly played by Hailey Kilgore, had been rescued as a child after a tumultuous storm by a compassionate peasant couple, Tonton Julian (Phillip Boykin) and Mama Euralie (Kenita R. Miller). Her upbringing, like the island overall, is overseen by four gods: Agwe (water) (Quentin Earl Darrington), Asaka (mother Earth) (Alex Newell), Papa Ge (death) (Merle Dandridge), and Erzulie (love) (Lea Salonga).


When the injured Daniel is brought back to his home, Ti Moune defies her parents and the skeptical townspeople, and sets out to find him. At first, he doesn’t know her, but she convinces him of the truth of her tale. But the happy reunion is tarred by their class differences.


There’s been some gender rearranging in the casting of Papa Ge and Asaka, and both Dandridge and Newell are outstanding. All the performances here are quite splendid with Kilgore making as memorable an impression as did La Chanze originally. Boykin and Miller are the epitome of loving parental concern for their adopted charge. Those all-important gods are distinctly embodied by the actors, and Salonga is lovely as ever. Powell sings beautifully and strikes just the right balance of romantic ardor and insensitivity for his rich boy role.


The Circle in the Square playing area has been cleverly transformed into a picturesque, storm-swept island environment (scenic design courtesy of Dane Laffrey) with such unusual items as a live goat, chicken, and and water. The contrast between the native and the high-born city folks is well conveyed both in the performances and Clint Ramos' evocative costumes. And the estimable team of Jules Fisher + Peggy Eisenhauer’s lighting beautifully defines every mood.


Peter Hylenski’s sound design is pitched rather loud during the rambunctious island numbers, but is appropriately refined for the more refined upper crust scenes of the latter half of the show.


Arden’s ingenious stagecraft is demonstrated in numerous instances, from the storm scenes to Daniel’s car crash to Ti Moune’s journey to the big city.


Under his direction, every number lands, and the evening is a joyful and profoundly moving experience.


Print this post
Posted by Harry Forbes at 2:22 PM