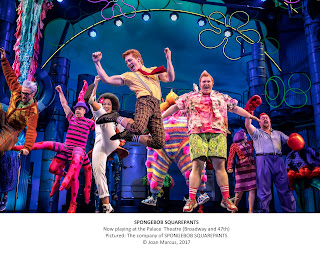 This musical version of the hugely popular Nickelodeon franchise turns out to be a most delightful entertainment, even for a newbie like me with little prior exposure to the TV series, or film versions, or any other incarnation of the the story of the sweet-natured kitchen sponge and his cronies in the underwater world of Bikini Bottom.

One quickly learns who these characters are, even though they are played as humans not as anthropomorphized creatures, and the cast members beautifully convey all the requisite characteristics of their roles.

When a volcano threatens the destruction of the town, the three of them contrive to defuse it before disaster strikes. There’s also a showbiz wannabe Squidward Q. Tentacles (Gavin Lee) a groupie pirate named Patchy (Jon Rua) who opens each act before “security guards” evict him, Larry the Lobster (Allan K. Washington), and more. The villains of the piece are Sheldon Plankton (Wesley Taylor) and his wife Karen the Computer (Stephanie Hsu).

David Zinn’s multi-hued set and costume design must surely rank as the most zanily and gorgeously colorful on Broadway. (The green and pink bedecked sardines, and the pink jellyfish are eye-popping cases in point.)

Christopher Gatelli’s choreography is highly inventive and entertaining, especially “I’m Not a Loser,” a glitzy old-fashioned song and dance production number for Squidward and a chorus line of Sea Anemones.

In the action packed second act, as Spongebob, Patrick, and Sandy attempt to ward off disaster, Landau’s staging is really quite brilliant. With chairs, ladders, and platforms, there’s a real sense of the intrepid trio scaling the volcano. Her work here and throughout is comparable to the magic wrought by Julie Taymor in “The Lion King,” the gold standard of unlikely animated tales successfully adapted for Broadway.

The score is an amalgam of numbers from disparate sources (David Bowie, Cyndi Lauper, Sara Bareilles, John Legend, and so on, but somehow it all hangs together most engagingly from the exuberant opening number (“Bikini Bottom Day”) to the penultimate and touching “Best Day Ever.” Krusty and Pearl’s contrapuntal duet “Daddy Knows Best,” with Krusty extolling money, and Pearl wanting her father’s love is a standout. Patrick’s incongruous gospel number “Super Sea Star Savior” wherein sardines (dressed nattily in pink and green) extol his great wisdom.

Needless to say, kids will love it, but there were few at my performance, and enthusiasm was still off the charts.


Print this post
Posted by Harry Forbes at 1:13 PM