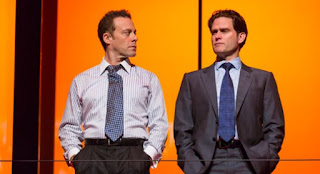 
Here’s a taut drama from Pulitzer Prize winner Ayad Akhtar (“Disgraced”) set in 1985 about an unscrupulous financier (Stephen Pasquale) plotting a hostile takeover of a family business, a Pennsylvania steel company, while its owner Thomas Everson (Rick Holmes) frantically attempts to hold onto it and protect its workers in whom he takes a paternal interest. Pasquale’s character, Robert Merkin, is a thinly-disguised stand-in for disgraced investment banker and junk bond trader Michael Milken.


The takeover will be the self-proclaimed “deal of the decade.” Merkin has made the cover of Time magazine which has dubbed him "America's Alchemist," and touted his dubious philosophy that "debt is an asset.”


If you know little about matters of high finance, that will not ruin your enjoyment of the play as Akhtar has skillfully constructed a clear narrative. And the conflict -- not unlike a sprawling Shakespeare history epic -- is completely absorbing.


Merkin’s outrageous “creative financing” -- shakily reliant on an intricate debt structure -- and the callousness with which he manipulates those around him make him a fascinating anti-hero, even if we’ve seen this Wall Street skullduggery before on stage and screen. Still, Akhtar’s voice is unique, and he entertainingly dramatizes this crucial period that laid the groundwork for the supremacy of money today.  Director Doug Hughes, fresh from “Oslo,” yet another play inspired by real events, shapes the action with a sure hand, and draws terrific performances from his cast.


Besides the superb work of Pasquale and Holmes, there are outstanding turns from Michael Siberry as an old-school financier who tries to bankroll Everson’s business with old-school means; Matthew Rauch as the callous corporate raider; Matthew Saldivar as Merkin’s lawyer; Joey Slotnick as a crooked trader, Miriam Silverman as Merkin’s calculating financial wizard of a wife; Teresa Avia Lim as an investigative journalist chronicling Merkin’s story; Ethan Phillips as one of Merkin’s hapless investors; Henry Stram and Ito Aghayere as Everson’s advisors; Charlie Semine as a U.S. attorney with mayoral ambitions; and so on.