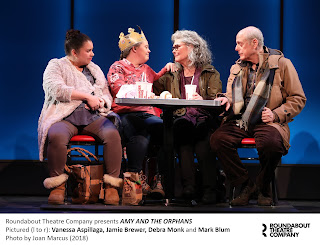 
Here's a sad-funny play about an adult brother and sister traveling to their late father’s memorial with the sister they barely know, the titular Amy. She has Down syndrome and both Maggie and Jacob (who now consider themselves “orphans”) are waiting for the right time to break the news of their parents’ death to Amy. (It happens the the mother has died as well several months earlier.)

Joining them on the Long Island Expressway road trip is Amy’s tough but compassionate Italian pregnant caregiver Kathy. A parallel story involving troubled couple Sarah and Bobby at a marriage counseling center, which opens the play, eventually dovetails with the first plot.


Lindsey Ferrentino’s 90-minute play was inspired by her own aunt who had Down syndrome, and who had been institutionalized. She has a fine knack for capturing natural speech rhythms, and the play, despite the heavy-seeming theme,  is thankfully quite humorous much of the time.


Jamie Brewer, a Down syndrome actress who has appeared on “American Horror Story,” is extraordinary as movie fanatic Amy (she holds a job at a local cinema), and delivers the play’s final monologue with impressive passion and poignancy. But all the performances are spot-on. Diane Davis and Josh McDermitt as the troubled couple attempting to reconcile win our sympathy from the start. Monk is terrific as real estate agent Maggie, the lonely and phobic divorced sibling, as is Mark Blum as her brother, the health conscious born again Christian Jacob, who tries rather hilariously to explain the concept of death to Amy with straws representing the continuum of life. Vanessa Aspillaga shines as Kathy, particularly in a long monologue about her “pothead” boyfriend’s dysfunctional sister.


Rachel Hauck’s set morphs fluidly from counseling room to airport to car to Burger King and other dreary locations.


The subject matter is worthy, to be sure, and, more broadly, says something about family and how we might undervalue certain relatives and be clueless of their true worth. Still it must be said, some surprising twists notwithstanding, the main story arc is rather predictable. To its credit, the play avoids mawkish sentimentality, as does Scott Ellis’s assured direction, which draws fine performances from the cast. The comic scenes, such as the memorial in a Chinese restaurant, are expertly staged.


Interestingly, Brewer has a male understudy, Edward Barbanell, necessitating a title change to “Andy and the Orphans” at his performances.


Print this post
Posted by Harry Forbes at 11:13 AM