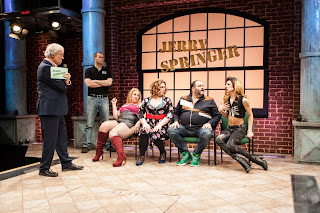 
One might have thought that 15 years after its 2003 premiere at London’s National Theatre (after which it transferred to the West End for a healthy run) that the musical about the talk show host, whose ratings actually peaked in the late 1990s, might not stand the test of time. But in this splendid New Group revival, powerfully sung and sharply acted, “Jerry Springer: The Opera” proves bountifully entertaining.


Composer/lyricist Richard Thomas (and his collaborator Stewart Lee who co-wrote the book and provided additional lyrics) have truly constructed the piece as a modern opera, and the present cast brings superb voices to their parts making for a vocally resplendent evening, though the words -- satirically echoing the lowest common denominator types who appeared on the show -- are blatantly crude. Obscenities and f-bombs abound, but it’s all valid satire, and the contrast with the arresting music only heightens the humor.


The first act is modelled on a typical episode of the show with the excellent Will Swenson a warm up man vacillating between seeming adoration for his boss, and deep resentments. The two side rows of the Linney theater are taken by cast members as “Jerry Springer Show” audience members. Finally, Jerry Springer, in the person of multi-talented Terrence Mann, makes his entrance, after which a very colorful (to put it mildly) succession of guests -- outrageously outfitted by Sarah Laux -- bare their hilariously sordid lives. Springer himself keeps his cool, leaving crowd control to Swenson’s warm-up character and and security man Steve (Billy Hepfinger). In the midst of the onstage chaos, Springer reminds us that, paradoxically, he was once mayor of Cincinnati and campaign manager for Robert Kennedy no less.


The “guests” include blue collar Dwight (Luke Grooms) who reveals his "guilty secret" to fiancee Peaches (Florrie Bagel): namely, he’s been cheating on her with her best friend (Beth Kirkpatrick), but wait, also with transvestite Tremont (Sean Patrick Doyle). Then there’s Montel (Justin Keyes) who wants his wife to mother him like a baby in diapers (and all that, um, goes with it), thereupon stripping down for the rest of the evening, and introduces Baby Jane (Jill Paice) who wants a share of the same role playing too. Finally there’s redneck Chucky (Nathaniel Hackmann) and his wife Shawntel (Tiffany Mann) who passionately yearns to be a pole dancer, much to Chucky’s disgust as well as that of her mother Irene (Jennifer Allen).


When Jerry is accidentally shot by a deranged guest (who was actually aiming at member of the Klu Klux Klan who come on doing a tap dance number), Jerry ends up in Purgatory where Satan (Swenson again) insists Jerry stage a show to set things right between him and Jesus, overriding Jerry’s objections that he doesn’t do conflict resolution.


The characters from the first half now return as Jesus (Keyes), Adam (Hackmann), Eve (Tiffany Mann), Mary (Allen) and even God (Grooms). It was this particular part of the show that raised the ire of Christian groups back in 2003 leading to protests against the show, and later the BBC when a televised version was shown, and outside Carnegie Hall when the show was given in concert form in 2008.


With the passage of time, these sequences somehow seem less outrageous than originally, or perhaps it’s just that we’ve seen so much more. Stil, if you were likely to be offended 15 years ago, chances are you’d feel much the same way now.


Aesthetic and religious sensibilities aside, the second act is simply not as much fun as the first. I remember feeling a distinct let down when I first saw the show in London. But watching it again, I felt the act’s basic premise -- accepting the warts and all of humanity, and taking care of yourself and each other -- is well intended, and certainly the quality of the music and lyrics never flags. The overall score, in fact, seems more impressive than ever with its canny mix of opera, show tunes, and pop tunes.


Terrence Mann makes an excellent Jerry Springer, if not the lookalike Michael Brandon was in the London production. It’s a mostly non-singing role, though he’s got a bit of singing in the second act. Swenson is outstanding in both his diabolical roles. Doyle’s tenor impressed throughout. Paice’s ethereal soprano was another highlight. But it was Tiffany Mann’s soulful pole dancing number that won the biggest hand.


John Rando is quite the perfect director for this sort of thing. He brings much the same comic sensibility as he did with “Urinetown” and he doesn’t disappoint with ingenious touches throughout. Chris Bailey did the clever choreography, including a fun bubble number, and the aforementioned KKK tap dance.


This is a smaller production than the original, but Derek McLane’s set, Jeff Croiter’s lighting, and Joshua Reid’s sound design (some overloading in the louder passages notwithstanding) are first-rate.


Terrence Mann is exiting the show on March 13 because of prior commitments and Matt McGrath will take over the Springer role for the show’s well deserved three-week extension.