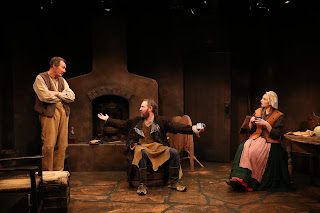 
But there’s nothing at all commonplace about the production which is very fine indeed. Beautifully directed by Charlotte Moore, atmospherically designed by James Morgan, and extremely well acted by a versatile ensemble of only six players, the 72-minute collection is well worth your time.


In “The Pot of Broth,” the Yeats piece (co-written with Lady Gregory), a wily tramp (amusing David O’Hara) cons a stingy wife (Clare O’Malley) and her amiable husband (Colin Lane) into believing he has a magic stone that, with merely the addition of little water, will make broth or wine or, in fact, any desired liquid. The fact that the tramp skillfully contrives to wheedle the other ingredients out of them for the pot seems to go over their heads.


In Lady Gregory’s “The Rising of Moon,” filmed in 1957 by John Ford as part of another triptych of Irish tales, a sergeant (Lane) stands guard hoping to catch a wanted rebel who’s broken out of jail, and collect the 100 pound reward. A “ragged man” balladeer (Adam Petherbridge), whom we suspect may be the escapee, comes along and engages him in small talk unearthing long dormant rebel sympathies on the part of the sergeant.


In Synge’s “Riders to Sea,” an anxious mother Maurya (Terry Donnelly) implores her last surviving son (Petherbridge) not to go to sea, and perish as his five siblings and father did before him. Her two daughters (O’Malley and McVey) attempt to comfort her, and also conceal the fact that Maurya’s last drowned son’s clothes have washed up on shore. The mood is rife with tragedy, and it’s beautifully conveyed.


This most somber of the three plays was famously turned into an opera by Ralph Vaughan Williams in 1927, and there have been other musical adaptations as well.


Donnelly is superb as the grieving matriarch, but all the actors are very fine whether in comic or serious mode. There’s music, too. Petherbridge starts things off with a ballad, and music is nicely employed throughout. Linda Fisher’s costumes and Michael Gottlieb’s lighting are further classy plusses.

Photo: Carol Rosegg. Pictured: Colin Lane, David O'Hara, and Clare O'Malley in "The Pot of Broth."   Print this post
Posted by Harry Forbes at 8:54 AM