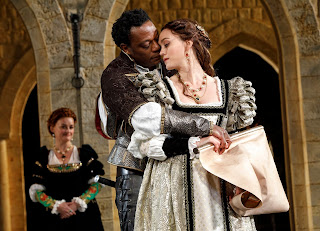 
As I walked into the Delacorte Theater on a balmy Sunday night, I felt a strong sense of deja vu remembering seeing my first Shakespeare plays at the Delacorte. This was because, even before the play began, Rachel Hauck’s set -- a series of stone archways suggesting 16th century Venice -- looked so reassuringly traditional, it was very much the way I remember things being in the days of founder Joseph Papp.


And as the players came out, that nostalgic feeling was happily reinforced by Toni-Leslie James’ lovely period costuming. It was clear that Ruben Santiago-Hudson’s production would not be subverted by any high concept notions but would unfold the story in reassuringly straight-forward fashion. And so it did.


Which is not to say, I hasten to add, that the two most recent “Othello” productions of my experience, both updated to a present-day military setting -- the 2016 New York Theatre Workshop production with David Oyelowo and Daniel Craig, and the 2013 National Theatre staging with Adrian Lester and Rory Kinnear, screened here in an NT Live presentation -- were inferior. Far from it; those productions were each in their ways revelatory, and featured superb performances..


But there’s something to be said for tradition. And in this sylvan venue, the time-honored approach seemed just right.


Ironically, though, the most unconventional aspect of the evening turned out to be the casting of Othello himself. The part is played by Chukwudi Iwuji, a fine actor and a bright spot in the Public’s recent production of ‘The Low Road” fall when he played a well-educated slave who gets the better of his arrogant young master.


But here, from his very first entrance, he somehow lacks the requisite majestic bearing of a military leader, and as soon as Iago begins poisoning his ear against his wife Desdemona, he takes the bait all too easily and become unhinged rather too quickly. While he plays the crazy jealousy very well on its own terms, at times emitting unmanly squeals and he tries to come to terms with her alleged infidelities, there’s not so much a sense of a great man brought down.


As the scheming Iago, Corey Stoll -- very impressive in last summer’s “Julius Caesar” as Brutus -- is capable enough, but can’t honestly be described the epitome of evil, as he’s simply too matter-of-fact in his machinations, and it’s somehow off-putting for Iago to be so much taller than his Othello.


Heather Lind is attractive, intelligent and fetchingly coquettish as Desdemona (and her “Willow Song” is lovely), but it is Alison Wright’s Emilia who walks away with the show as her steadfast lady-in-waiting and subservient wife to Iago. Her outraged indignation after Desdemona’s death were the finest moments of the evening, and throughout she was a model of clarity showing just how “American” Shakespeare can be done.


There was capable work too from Babak Tafti as Cassio, Flor De Liz Perez as his mistress Luce, Miguel Perez as Desdemona’s infuriated father Brabantio, and Motell Foster as Roderigo (though it was rather odd to cast a black actor as Desdemona’s disappointed suitor in a play where Othello’s race is such a key plot point),


Ruben Santiago-Hudson’s direction is admirable in its unfussiness, though hasn’t quite been resourceful enough, as had been the case in those aforementioned productions, to make us overlook the implausibilities in the Bard’s narrative. Desdemona’s endless pleadings on behalf of Cassio which so plainly fuel Othello’s jealousy and Emilia not confessing earlier that she had passed on her mistress’ handkerchief to Iago, strain credulity more than usual.


Derek Wieland’s music is always apt, coming in like movie music at key moments, but sonically has a canned perfunctory quality.


The murder of Desdemona is particularly well staged, though the aftermath -- satisfying as ever to see Othello get his comeuppance and Iago’s villanies revealed -- feels overly protracted, allowing Iwuji’s whining regret to go on too long.


Despite these occasional failings, there is much to enjoy here, and no matter how often you’ve seen it, such is the power of the piece that one is completely gripped, particularly throughout its exciting second act.


(The Delacorte Theater in Central Park, 81st Street and Central Park West or at 79th Street and Fifth Avenue; free ticket distribution or call 212-967-7555 for more information, or visit www.publictheater.org; through June 24)


Print this post
Posted by Harry Forbes at 11:48 AM